By Max Rashbrooke on October 26, 2013No Comments

“We need more days of anarchy!” cries Havana Coffee Works head honcho Geoff Marsland in the third of our interviews with Wellingtonians that matter. 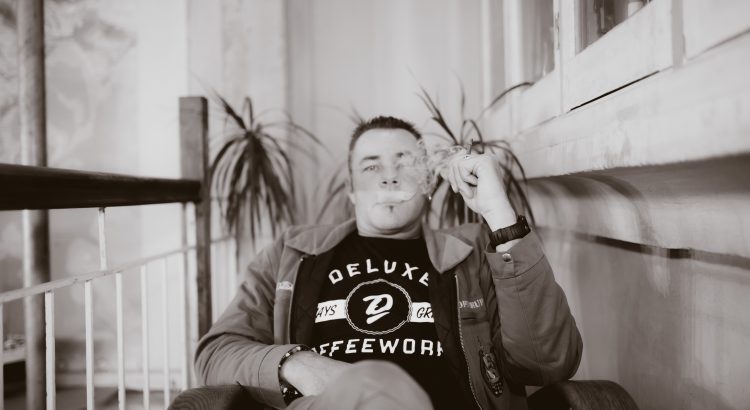 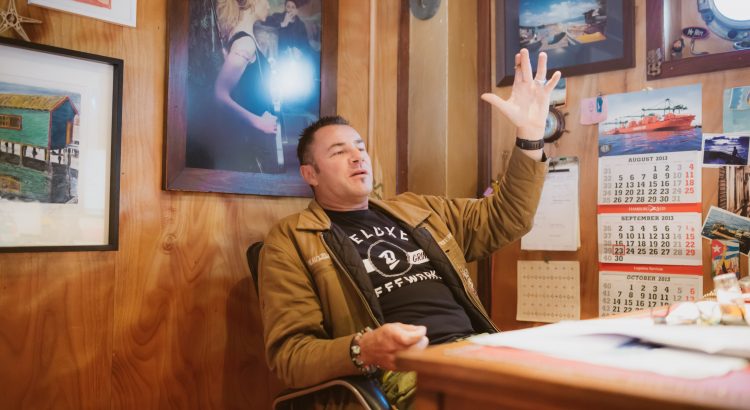 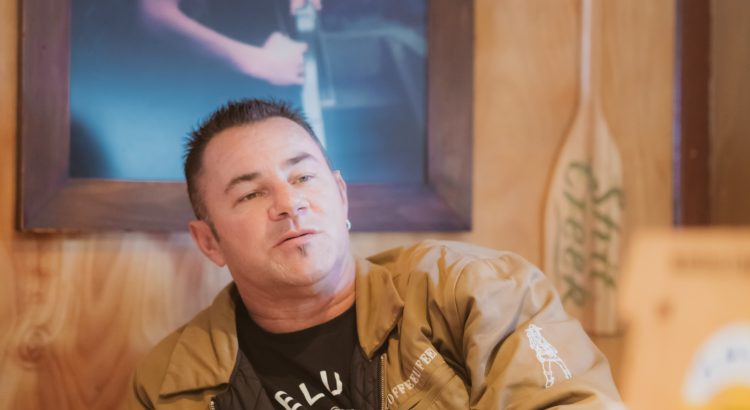 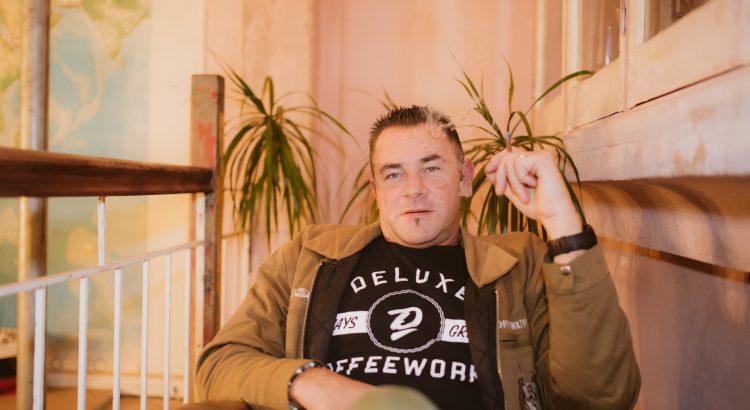 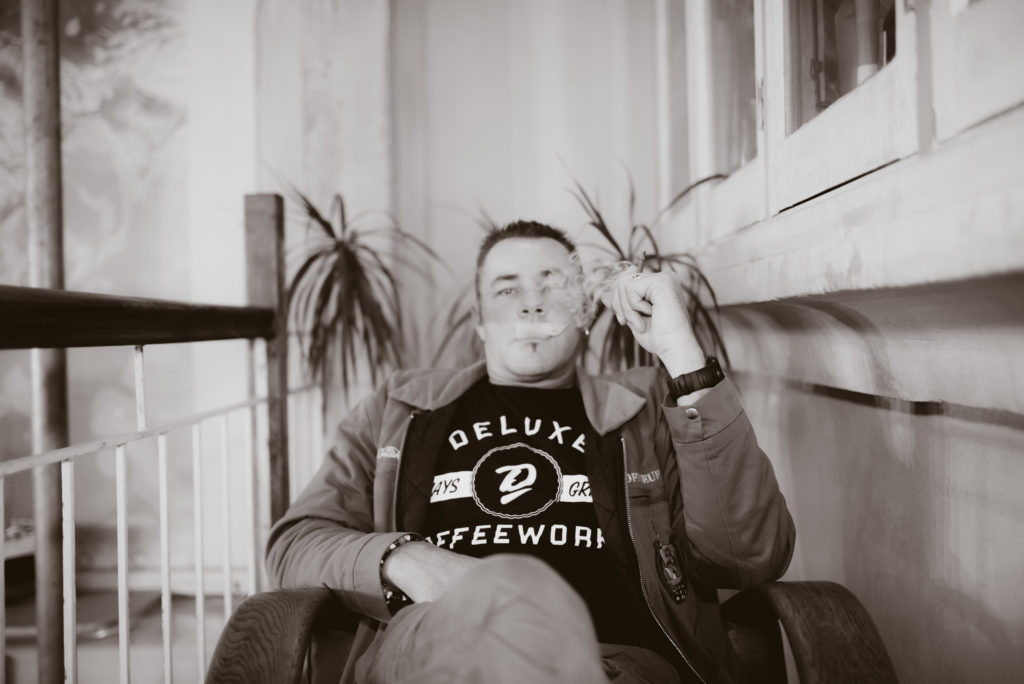 One of Wellington’s ‘cof­fee kings’, Geoff Mars­land helped kick­start the capital’s café cul­ture in the 1980s, co-found­ing (with Tim Rose) Wel­ling­ton café fix­tures Mid­night Espresso and Deluxe, and launch­ing Havana Cof­fee. He now oper­ates out of Cuban-themed premises in Tory Street, where he held court, with cigars and shots of rum all round, to writer Max Rash­brooke and pho­to­graph­er Car­oline Atkin­son – although only after start­ling them with a revved-up chainsaw.

So, what’s the story with the chainsaw?

Whenev­er I see a chain­saw, I get excited, so I like to start it up.

Right. Any­way, it’s been 25 years since you launched Mid­night Espresso.

Twenty-five years. Isn’t it amaz­ing? It’s unbe­liev­able. Where has it gone? I’ve become an old man. The oth­er night I was at this man­sion in Khan­dal­lah and some­body had the crew from the New Zea­l­and Sym­phony Orches­tra there, just as a bit of a fun­draiser. I thought, “Shit, this is amaz­ing – but I must be get­ting old if I’m enjoy­ing this.”

And you’re doing a book to mark the occasion.

Well, in the last five years, I’ve sud­denly thought, maybe there is a story to tell, and the story is the early days. It was much more pion­eer­ing, since there was no café cul­ture in Wel­ling­ton at the time. If you trace it back, most revolu­tions start in cof­fee shops. So this was the Wel­ling­ton Revolution!

Also I thought it’d be quite nice to do a book, because books are nearly extinct. A book could be a nice old-fash­ioned way to doc­u­ment something.

What’s going to be in the book?

We def­in­itely want to have a chapter in it called Bas­tards We’ve Known. Who’s on the list? I couldn’t tell you now. You’ll have to buy the book. But we’ve come up against a few, as you do in Wel­ling­ton. You know, coun­cil­lors and landlords…

I do laugh about the Abso­lutely Pos­it­ively Wel­ling­ton. Just like the Seav­iew Motel hav­ing no sea view, I think Abso­lutely Pos­it­ively Wel­ling­ton is a joke. One of the biggest hurdles has prob­ably been the coun­cil for us. Even small things like the park­ing make it so dif­fi­cult to run a busi­ness in the city. The rev­en­ue gathering…

A lot of the things that we’ve done for the city have been a shit­fight to do. Like back in the late 1980s, try­ing to put tables on the foot­path… We tried to put tables out on Cour­tenay Place, which you couldn’t do. So we got an old car and chopped the roof off, made hub­cap stools and everything, made a table and then we put it out­side the café, parked like a car. Then the coun­cil said we could only leave it at the meter for two hours, so we had to keep swap­ping it around the meters.

Now, all of a sud­den, you can do it, put­ting tables on the street – but they charge you.

And there was the way the whole ‘apart­ment liv­ing’ thing was handled.

The coun­cil let developers build apart­ments in the city. All these people sold their apart­ments in Khan­dal­lah and moved to Wel­ling­ton, but as soon as Night­line was fin­ished at 10.30pm, they wanted everything to shut down.

I just wanted to smash eggs on my face. We’ve built this cul­ture, now you’ve sold this cul­ture so that people can come in, and now the culture’s got to shut down. In what oth­er city in the world would that happen?

Oth­er than work, your great love is sail­ing, right?

Whenev­er I’m not work­ing I’m sail­ing. Because of the weath­er, I always end up out on my boat with the most unusu­al people. It’s like, who­ever I saw on the way to the boat. And the funny thing about get­ting on a boat is that people always talk can­didly, like they’re nev­er going back to land. So you have the most inter­est­ing con­ver­sa­tions out there. You might go out for an hour on the har­bour and they might tell you things they wouldn’t say in a nor­mal environment. 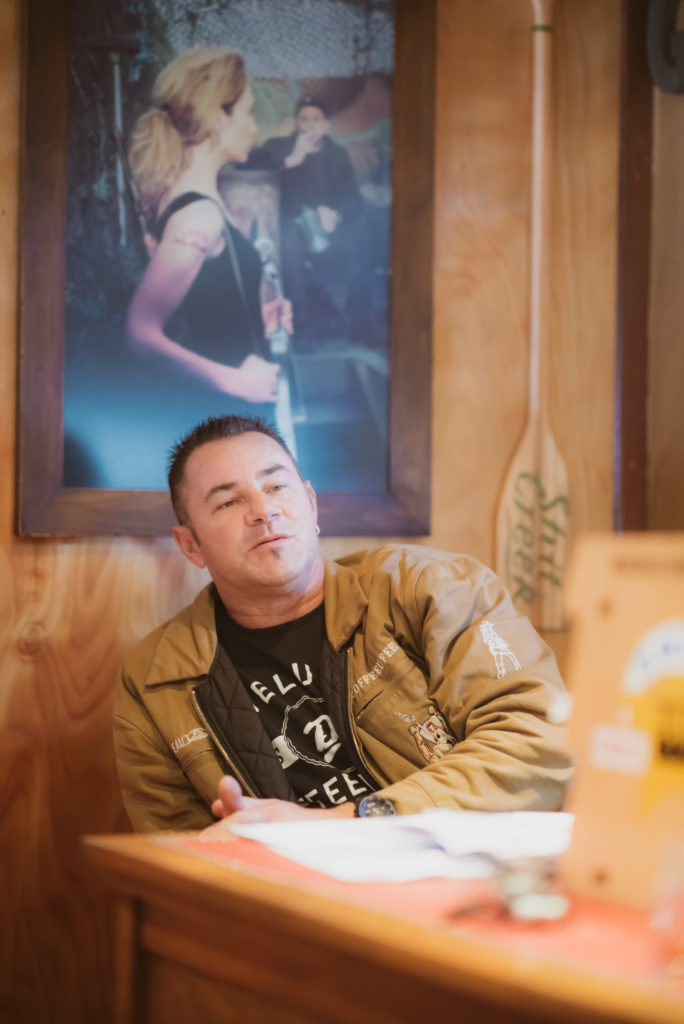 But are you still lov­ing Wellington?

I’m sort of a little bit tired of Wel­ling­ton. I’m a bit trapped here because of the busi­ness and my kids all going to school. I’m just tired of the wind, which is unusu­al for a sail­or, but finally it’s just beaten me. I love Wel­ling­ton, but I wake up every morn­ing and I can hear the wind beat­ing at the win­dow and it’s really start­ing to get on top of me. It’s repress­ive. It makes you more hardy but it makes you hunch down. It’s tir­ing me.

Hav­ing said that, I’d quite like to move onto a boat, to live.

Wouldn’t that be a bit cramped?

I quite love small spaces… I lived in a house truck before I had cafés. I have got claus­tro­pho­bia, though. I was in Cuba recently, in one of those old lifts with gates across them. It star­ted to go down and then, bang, there was a power cut, and in Cuba, when you have a power cut, it can be for 24 hours.

All of a sud­den, I’ve got the dry hor­rors, and I’m not breath­ing very well. It’s a sud­den pan­ic, like I’m going to die in a lift. In fact, the gates did open and I could see the next floor down. I thought, “Shit, what do I do?”, so I actu­ally jumped out, but I was freaked out that the lift was going to start again.

Now, some­times I freak out driv­ing through tun­nels. I find myself driv­ing through the Mt Vic tun­nel and sud­denly I have a claus­tro­pho­bia that I’ve nev­er had before. That lift thing. I hate that feel­ing of being enclosed.

But liv­ing on a boat would also be, well, quite enclosed.

Maybe I like the womb-like aspect of it. I was adop­ted, so maybe it’s like being back in the womb.

Would you ever be a politician?

People keep say­ing I should run for may­or, not that I would even enter­tain it. I actu­ally am the deputy may­or of Cuba Street. I was the may­or for years, because I was on Cuba Street, at the old Havana. Then they said I couldn’t be may­or, because I moved to Tory Street, but they knew I was a mover and shaker so they made me the deputy, which I wasn’t very impressed with, cos it’s the deputy may­or who does all the work, isn’t it?

So you wouldn’t want to be the city coun­cil mayor?

Not at this stage, no. I would nev­er say nev­er. I think it’d be hard work. And I’m more of a free agent. I’m more like, “Shit, this is good, let’s do this, and if people don’t like it, they don’t like it, they don’t have to come.” Prob­ably because I’m left-handed and hyper­act­ive and dys­lex­ic, I’m not very good with the whole pro­cess and sys­tems things. I’m like, “Yeah, yeah, yeah, let’s do that”, and then I think, “Shit, that wasn’t a very good idea, was it?” I’m more off the cuff.

But if you were may­or, hypo­thet­ic­ally, what would you do?

I’d prob­ably have law­less days – days of anarchy, one day a week. There’d be all things like cloth­ing option­al, free park­ing, and all the ser­vices would be free on that day, like buses and trains. It’d be just one day a week, and we’d change the day. It wouldn’t be announced until that day.

I’d also bring back the Cuba Street Car­ni­val if I was may­or. I’d make it monthly.

Wel­ling­to­ni­ans are totally spoiled. If you know where to go, the food and the envir­on­ments and the alco­hol are totally world-class. Look at Al Brown. All he’s done is taken little bits of Wel­ling­ton to Auck­land and they’re lov­ing him up there, you know?

But a lot of people are suf­fer­ing. Say there’s 400 cafés in Wel­ling­ton, there’s prob­ably 20 doing really, really well, 50 doing OK and the oth­er 300, if they had to pay their bills they’d close tomor­row. The rents are a real killer. Rents up to $200 grand a year are not unheard of, so in some cafés, they’re just work­ing for the landlord.

Are there too many cafés in Wellington? 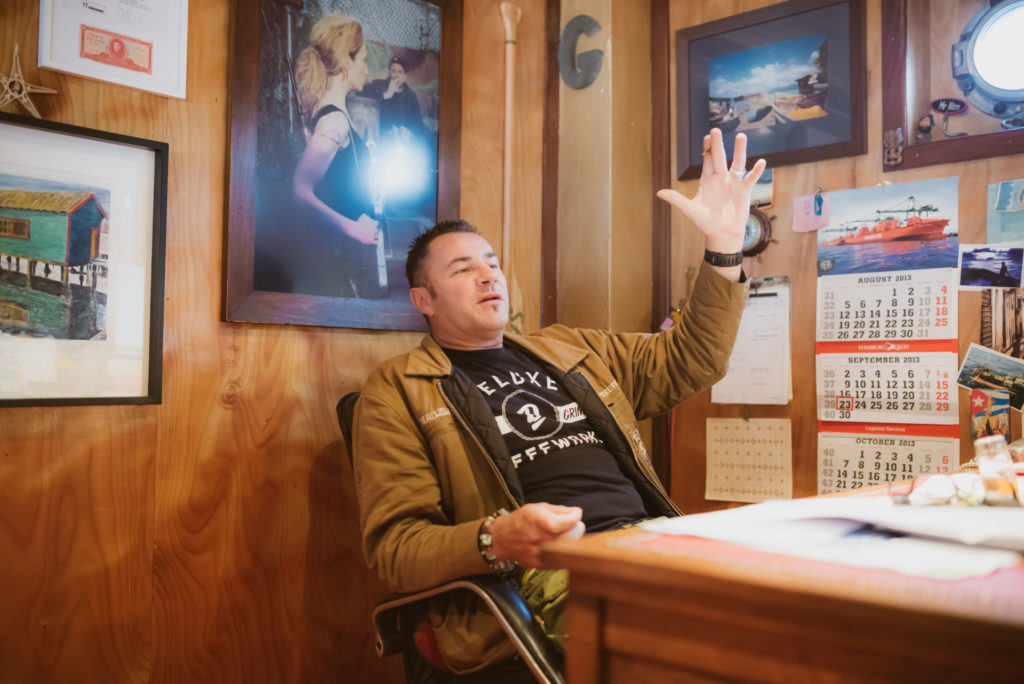 Why are your cafés still going after 25 years?

Because they’re not per­fect. At cer­tain cafés in town, you’d want to put on your best lip­stick and go in there and feel like a mil­lion dol­lars, and everything is per­fect. But Mid­night Espresso is like people’s real lives – people’s lives aren’t per­fect, they don’t always do the dishes or make the bed, so you can walk into Mid­night, you can go in there with your bad hair day, and it’s warts and all, like people’s lives.

The area – Cuba Street – has changed in that 25 years, though.

It was dark days, when we opened. It was all politi­cians and hookers.

Which would you rather hang out with?

They all come in the same car: these days, everyone’s both, aren’t they? Politi­cians are hook­ers and hook­ers become politi­cians. It’s the same career move!

A lot of people are talk­ing about the Liv­ing Wage cam­paign, which is call­ing for people to be paid $18.40 an hour instead of the min­im­um wage of $13.75. What do you think?

I think it’s a great idea. I just don’t under­stand how people get by on the wages they’re on. It costs you $60 just to go to McDonald’s and have some­thing with your kids. And most of my staff are prob­ably nearly at the Liv­ing Wage, yeah. A lot of them are way above that.

And you think busi­nesses can afford it?

If people are get­ting paid more, they’re going to go out more, aren’t they? So it ups the ante.

I’m def­in­itely a news­pa­per read­er. I’m one of those guys from the school where, if I haven’t read the news­pa­per, I can’t go to the next day.

I went to bloody Mataur­anga in the Aro Val­ley. Also I got sus­pen­ded from Wel­ling­ton High and they haven’t rung back yet. Now I’ve got a kid at Scots, a kid at Welles­ley and a kid at Wors­er Bay. Work that one out!

Coffee’s like that as a drug: it’s quite irra­tion­al, it’s got its own energy, it’s phonetic.

Her­it­age is bull­shit. When I was doing Havana bar, there were three cot­tages. One day one of them went away on a truck, and it’s now up in New­town Aven­ue. So it’s all right for the coun­cil to take one away on a truck and put it up in New­town. That’s still her­it­age. But I had someone tell me the roller door on one of the cot­tages is her­it­age. How can a roller door be her­it­age? Roller doors are 1960s or whatever.

If you met a woman in Aus­tralia and said, come and live with me, I reck­on your suc­cess rate would be pretty low, d’you know what I mean? I’ve had that. I’m not blam­ing it entirely on the weath­er, though.