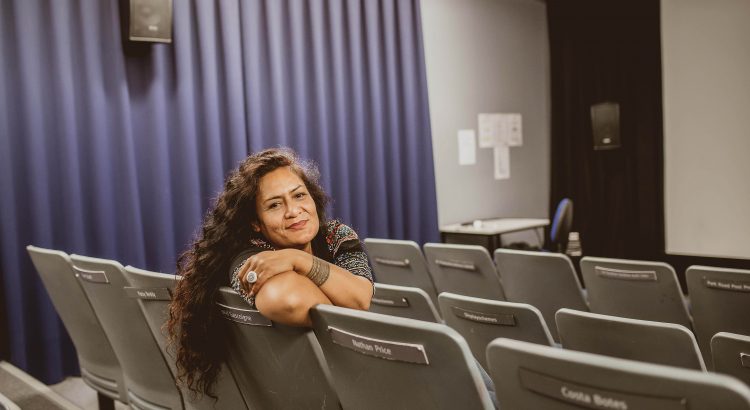 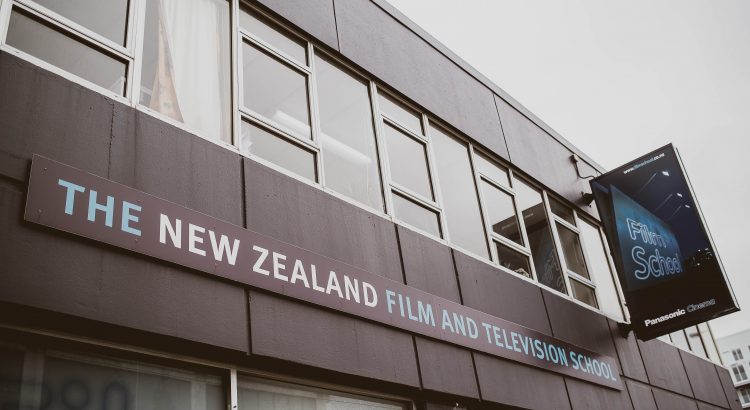 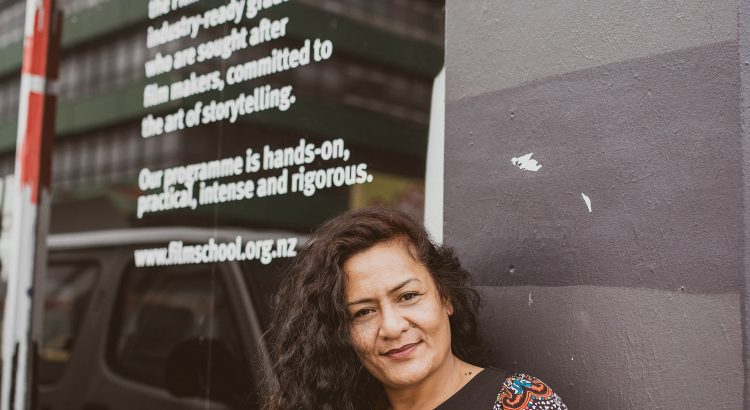 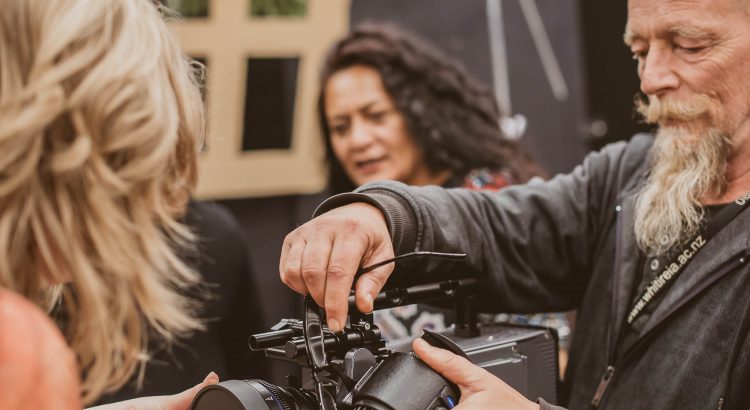 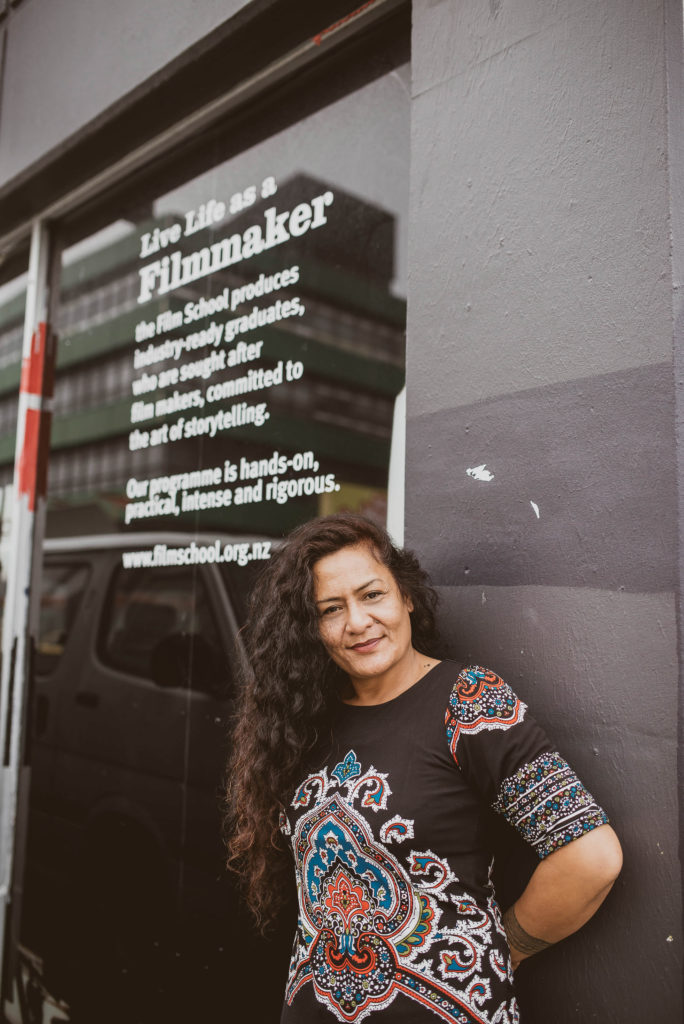 Sima Urale is a film­maker, a writer and an act­or. Born in Sam­oa, and ini­tially raised in the vil­lages of Fagamalo and Matavai, she migrated with her fam­ily to New Zea­l­and in 1974 and grew up in Island Bay, where her moth­er was a teach­er at Wel­ling­ton South Primary School.

She was encour­aged into act­ing in her teens, and audi­tioned suc­cess­fully for Toi Whakaari, where she was in the same year as Tim Balme and Cliff Curtis. After gradu­at­ing, she was cast in the Gib­son Group com­edy series Skitz and then its spin-off, The Semis­is, while at the same time win­ning Chap­man Tripp Theatre Awards for work like John Kneubuhl’s Think of a Garden.

Sima was accep­ted at Melbourne’s pres­ti­gi­ous Vic­tori­an Col­lege of the Arts (VCA) School of Film and Tele­vi­sion (formerly Swin­burne), win­ning the VCA Encour­age­ment Stu­dent Award. After gradu­at­ing in 1994, she returned home to Wel­ling­ton and made O Tamaiti (1996), which won the pres­ti­gi­ous Best Short Film award at the Venice Film Fest­iv­al, as well as Best Short at the New Zea­l­and Film Awards. Her doc­u­ment­ary Vel­vet Dreams (1997), on the arcane art of vel­vet paint­ing and espe­cially its prac­ti­tion­er Charlie McPhee, screened inter­na­tion­ally and also picked up sev­er­al awards, while her second short film — Still Life (2001) — won the top prize at the Montreal Film Fest­iv­al. Her first music video — for her broth­er Bill Urale (aka King Kapisi) —took out the best New Zea­l­and Music Video award, almost as a mat­ter of course.

Sima has also worked with her sis­ter Maker­ita on the tele­vi­sion arts show The Liv­ing Room, and with her broth­er Tati, and sis­ters Nata­sha and Maila, who are all employed in the arts.

In 2008, Sima’s debut fea­ture, Apron Strings, opened the New Zea­l­and Inter­na­tion­al Film Fest­iv­al, and since 2012 she has been the head tutor at the New Zea­l­and Film and Tele­vi­sion School in Vivi­an Street. 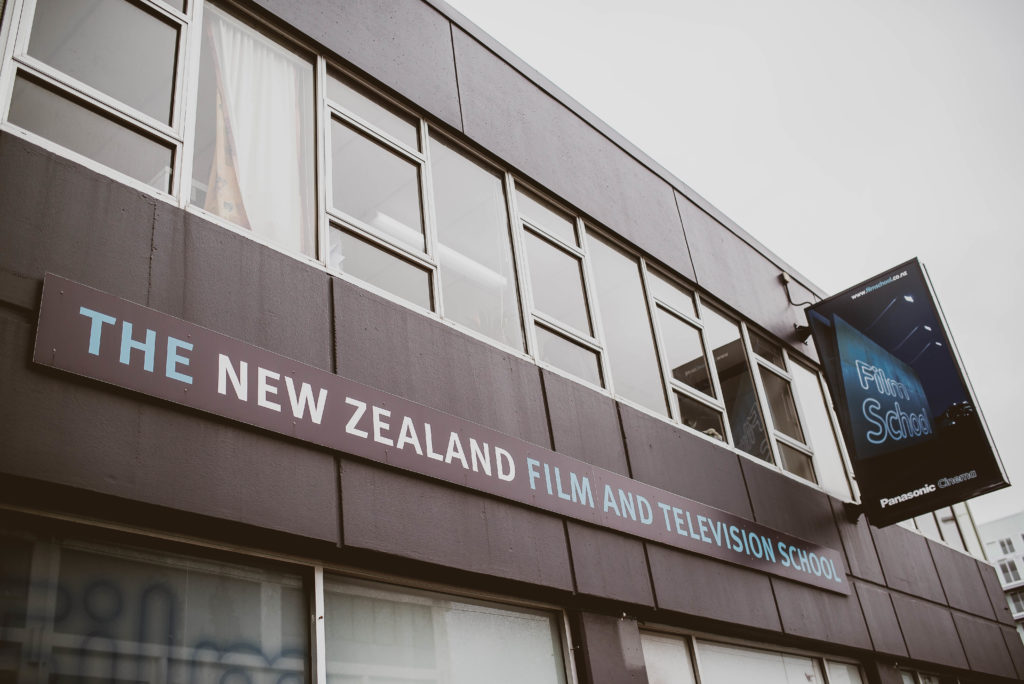 We meet in Sima’s office. It’s a stand­ard space: white-walled, fluoro lights. Her desk is awash with papers, notes, scripts. It is a place of admin­is­tra­tion and man­age­ment, clearly some­where to do a cer­tain type of work, but not some­where Sima wants to spend any more time than is neces­sary. When I men­tion that our pho­to­graph­er Car­oline will be arriv­ing in an hour, Sima imme­di­ately says, “Let’s not do pho­tos in here. Let’s go into the stu­dio. They’re build­ing sets in there now… it’s great.”

“Film-mak­ing, you have to think quite selfishly, y’know? When you’re mak­ing the film, it has to be gen­er­ous, and com­pas­sion­ate, and all that stuff. But when it comes to actu­ally get­ting a film off the ground, you have to be single-minded and selfish. I think every­one who’s ever made a film would have found that. It’s not like oth­er arts, where you can pick up a gui­tar, or a sheet of paper, and cre­ate. With a film, you’re going to need people to fol­low you, and you’re going to need a cer­tain amount of money — and that’s nev­er small — and you’re going to need some infra­struc­ture behind you. And put­ting all that togeth­er… it takes an act of will, and it takes two or three years every time you try to do it. That’s my exper­i­ence any­way. And it gets tir­ing. So once in a while it’s good to put your energy into some­thing else, and for me, it was good to have an oppor­tun­ity to pass on a few things, and to put some­thing back into the film community.

“Pri­or­it­ies change. At heart I’m a Sam­oan girl, and my par­ents were get­ting older, and I wanted to be avail­able to help take care of them. When you’ve got people to love and to care about, it changes everything. And sud­denly that life­style, of being a film-maker… it had to change. So I saw this and I applied, because I could see that I could be a good fit for it, and I got it. So this job became about pri­or­it­ies. And now I’m here, I love it. I’m sup­posed to be here inspir­ing them, and they just keep on inspir­ing me.”

We talk for a while longer, about the school, and the focus of this inter­view. Sima is adam­ant that if the inter­view is ‘about the school’, then there are oth­er people I should also talk to. But I assure her that the piece is about her, more than the school. She pauses, and then tells me some­thing I per­haps should have known before I made the call to set up this meeting.

“Dad passed away, just two weeks ago,” she says. “It was a beau­ti­ful tangi. All the kids, all the grandkids, every­one play­ing, every­one helped paint the coffin. It was quite amaz­ing. All the kids got to lay their hands on the coffin.”

She repeats that last line sev­er­al times as she speaks. “All the kids got to lay their hands on the coffin.” On my record­ing it almost takes on the qual­ity of a rev­er­ie, of a line from a poem wait­ing to be writ­ten. Or just maybe it’s a moment in a film that hasn’t yet been made.

“Dad was amaz­ing. He was just the fun­ni­est, hard­est-work­ing guy. It was impossible for a part­ner, cos Dad was always fun­ni­er than they were… bet­ter company.”

“He could hardly speak any Eng­lish, but it seemed like every­one in Wel­ling­ton knew him. He’d be at all the open­ings, all the first nights. Wherever the kids were put­ting some­thing on, Mum and Dad would be there. Com­ing over here I think he dreamed of his kids being doc­tors and law­yers, but instead every one of us went into the arts. 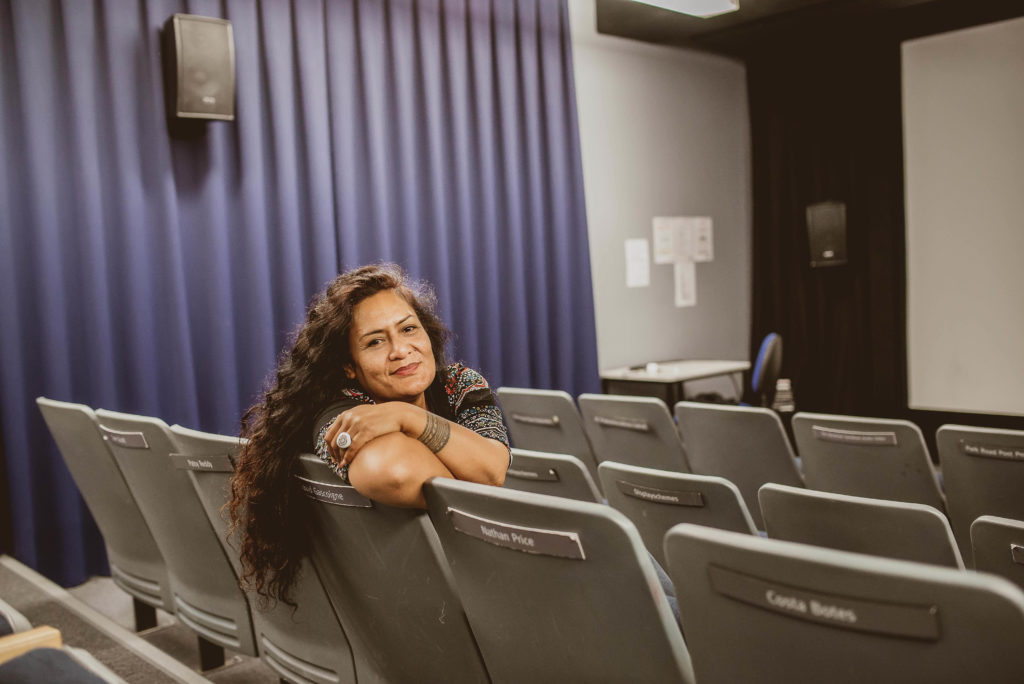 “We were Wel­ling­ton kids. Dad worked at the car­pet fact­ory, and Mum was a teach­er at Wel­ling­ton South. We couldn’t walk down the street without people want­ing to stop and talk to Mum. She was an amaz­ing teach­er. Really strong, really intel­li­gent, an amaz­ing motiv­at­or. Even today, it feels like she must have taught half of Wel­ling­ton. Tell you what, a couple of years ago I was vis­it­ing the hos­pit­al, and one of the doc­tors there, he’s look­ing at me, and he says, ‘Is your name Urale?’, and I think I know what’s com­ing, he’s seen some­thing me or Maker­ita was in, but no, he says, ‘Can you tell your Mum that I did become a doc­tor please? She said I could.’”

Sima laughs long and hard at this, and lit­er­ally shakes her head at the memory. It’s a won­der­ful moment, in a con­ver­sa­tion that has me grin­ning pretty much from begin­ning to end.

“I think you’ve got to be a bit mad to even try to make a film. I know every­one says that about whatever their job is, but in film, I genu­inely think it’s true. I mean, what it takes to put a film togeth­er… it’s prac­tic­ally aut­ist­ic levels of per­sever­ance and focus. And then there’s the actu­al mak­ing of it, and all that, for this incred­ibly insec­ure, unstable life. It’s amaz­ing to me that people want to do it. But here we are, run­ning a film school, turn­ing away 80 per­cent of the people who apply. 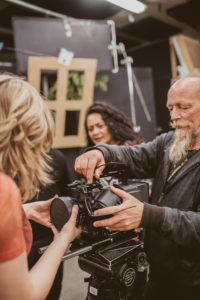 “I think the stu­dents get that edge-of-the-seat feel­ing. Once they’re here, they have to know that any­thing could hap­pen, and that a pro­ject could present itself at any minute. Because that’s real world in film. The phone rings, or the weath­er changes, and everything’s on. So we try to get them ready for that. And that’s not really some­thing you can teach, but if it’s already in them, I reck­on you can devel­op it, encour­age it, hone it.”

Sima has that envi­able strength that comes, I think, from being raised in a large and ram­bunc­tious fam­ily, of being a child from a vil­lage — wheth­er it’s the vil­lage in Sam­oa, or a vil­lage of the spir­it that she car­ries wherever she goes. And also a strength that comes from grow­ing up in New­town and south Wel­ling­ton, hanging with the tough kids and the brawl­ers, at a time when the city could be a lot more dan­ger­ous than it is now… (“You lit­er­ally knew which gang had which pub. Tell that to the kids in Cour­tenay Place now. Hah!”) In a theatre, or on her own film sets, she brings com­munity with her, and she seems to cre­ate it where she works. It’s a fab­ulous gift. I can’t help but envy these stu­dents a little.

“I don’t know how much you can teach really. They’re not here to train to do a 9–5 job. And we’re try­ing to get what should prob­ably be a three-year course into one year. So we can’t pos­sibly just sit them down and tell them stuff. People nev­er really learn like that any­way. But I think you can show. And I think that’s what the good teach­ers do. Y’know, I nev­er tell any of the stu­dents that we expect them to be here at the week­ends. Because we don’t, well not offi­cially. But if they’ve a big pro­ject on, then they’ll see me in here. And they might get it from that.”

I ask Sima what she might look for in a script, and she answers imme­di­ately. I guess it’s a ques­tion that she’s been asked many times already, but her answer is any­thing but rehearsed, just tested.

“It’s the theme. It’s not enough to just have a story, and some char­ac­ters run­ning around doing stuff. Any­one can write that, and that’s all half the stuff you see is. But if you want to make some­thing good, you’ve got to know what it’s really about. You’ve got to have a theme, and you’ve got to under­stand what it is you’re say­ing. Without that, it’s all a bit point­less eh? But unless I can see a theme, I’m not going to be able to make the film.

“I’m not really that pro­lif­ic. There’s a lot of dir­ect­ors who have made a lot more than me. But I think the few pro­jects that I have made, they’ve been noticed a bit. Because of the themes, or some twist or angle that I bring to it. So, maybe people think of me as being pro­lif­ic, and that’s great, but really I just try to make them count.”

Just for a moment, Sima holds a ser­i­ous face. And then, like she has a dozen times in the last hour, she dis­solves into a storm of laughter. Car­oline the pho­to­graph­er arrives, and we head down to the studio.