By Max Rashbrooke on February 27, 2014No Comments 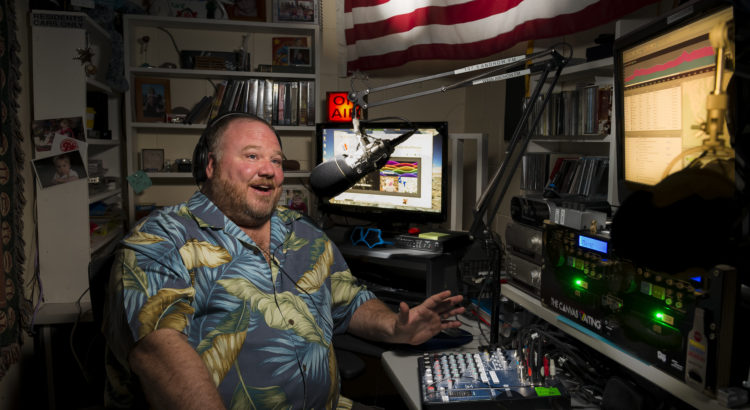 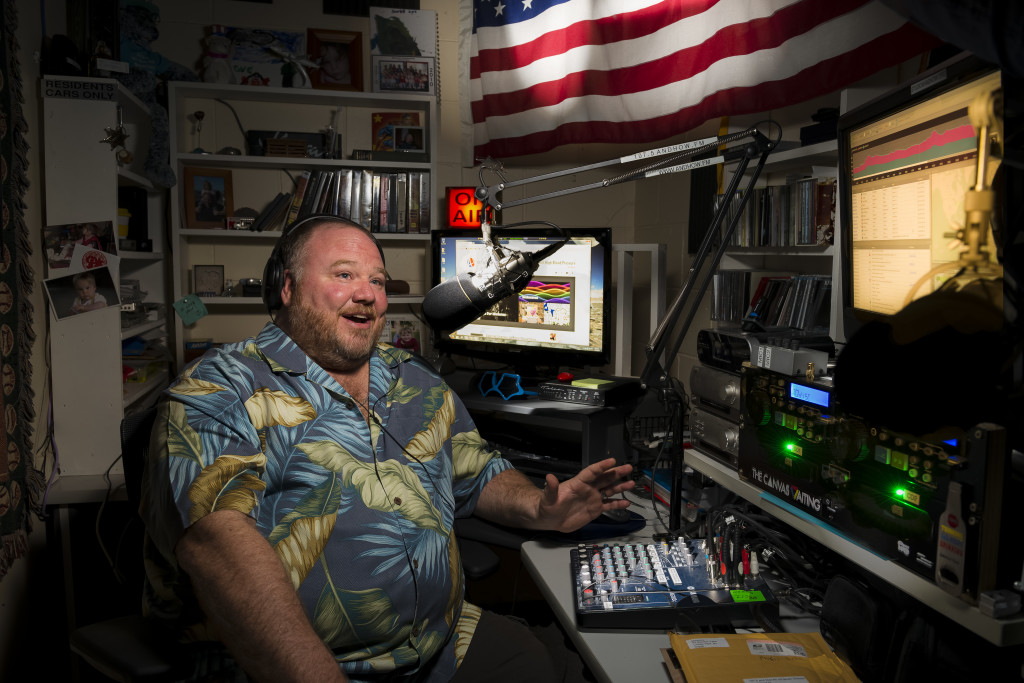 When Patrick Bren­nan was two years old, and liv­ing in his nat­ive state of Texas, he fell off a bal­cony. He still remem­bers the song that was play­ing at the time, ‘One Less Bell to Answer’ by The Fifth Dimen­sion. Tunes are ingrained in his life, his mind: “When I listen to music, it isn’t music,” he says, “it’s like watch­ing a play­back of some­thing in my memories.”

He’s sur­roun­ded by music, now. He runs an Inter­net radio sta­tion, andHow.FM, which pulls in 18,000 to 20,000 listen­ers a month, scattered out around the world like the spokes of a wheel whose hub is his small con­crete base­ment room in a sub­urb­an cul-de-sac in Papakow­hai. Britain’s Daily Tele­graph named the sta­tion one of the best in the world, even though prob­ably only a few thou­sand people in Pori­rua even know it exists.

Bren­nan star­ted up andHow.FM – named after a catch­phrase from the 1930s show Little Ras­cals – in 1998 when he was still liv­ing in Texas, back in the days of dial-up modems and slow down­loads. Then it star­ted to take over his life. “I had a swim­ming-pool busi­ness that I owned, but I neg­lected it,” he says, adding, with no appar­ent irony, “It wasn’t keep­ing things afloat anymore.”

It didn’t help that the US author­it­ies wouldn’t license his Inter­net radio sta­tion. But he had heard that New Zealand’s licens­ing regime was “a little more lib­er­al”. And so he came down under. “I was ready for change. I was will­ing to do whatever it took, because I didn’t want to give up.”

Bren­nan describes him­self as “driv­en” (this may be an under­state­ment). A big, bear-like man, he has a high laugh and at least one typ­ic­ally Amer­ic­an attrib­ute. “I wish there was a volume knob some­times, because out­side of my friends and fam­ily, I’m very private, and some­times I wish I could keep my mouth shut.” But he’s aware of the volume issue, which isn’t very Amer­ic­an – and of course it’s no bad thing for a radio man.

He’s still proud of being a Tex­an, but his Texas is one that draws on Cajuns as much as cow­boys. He’s part Cher­o­kee and part Choctaw. He’s no fan of George Dubya Bush, whom he once likened to a Horse­man of the Apo­ca­lypse. And he’s open-minded: his stu­dio fea­tures an Amer­ic­an flag in one corner – but in the oth­er, a Rus­si­an flag.

Bren­nan is now a partly nat­ur­al­ised New Zeal­ander, as you can tell from the way he addresses his listen­ers, altern­at­ing between “man” and “mate”. He lived in Gis­borne for a while, “and man, it was an exper­i­ence. When they say it’s an old boys’ club, I know what that means.” But he became immersed in Maori cul­ture; a powhiri he once atten­ded was “the most amaz­ing thing I had ever seen”, and he has since “made it my duty” to pro­nounce Maori well.

AndHow.FM doesn’t pay its way, des­pite tak­ing up to 30 hours of Brennan’s time each week, so he also holds down a job in IT. But the sta­tion nev­er seems like a bur­den. Quite the reverse: when he had to give it up for a few years, he was like a man unmoored. “I was really kind of lost in those few years,” he says – and his face falls, like a child’s, and he looks genu­inely bereft.

There may have been times when he doubted what he insists is “a pas­sion, not an obses­sion”. But see­ing the movie High Fidel­ity and its por­tray­al of a neur­ot­ic – but also hero­ic – record store own­er “made me feel like I was okay. I didn’t think I was crazy any­more.” Now, he adds, “I don’t know what else I would do. When I star­ted back doing this, I felt nor­mal again.”