Peter Hambleton has been a stalwart of the Wellington theatre scene for over 30 years but it took a call from Peter Jackson to make him an internationally recognisable actor. With all three parts of The Hobbit trilogy now well and truly in the can, Hambleton has returned to his first love — the stage of Circa Theatre — directing a new play, Equivocation, to open there in May. FishHead dispatched Graeme Tuckett to find out more about the man and the play. Caroline Atkinson took the photographs. 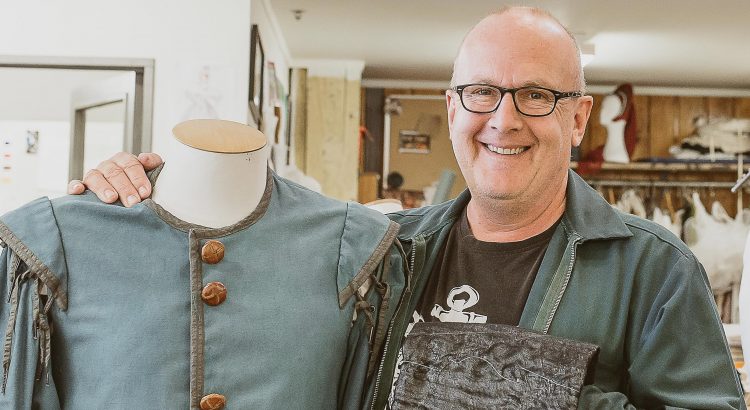 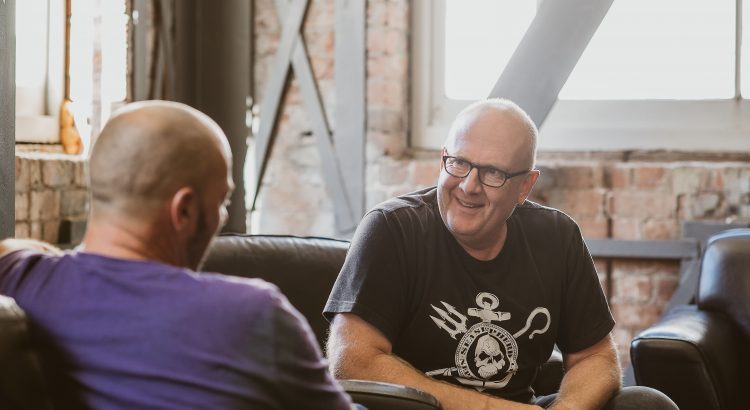 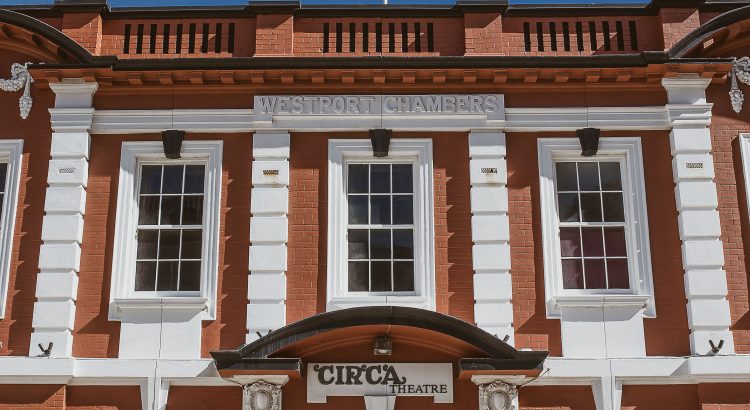 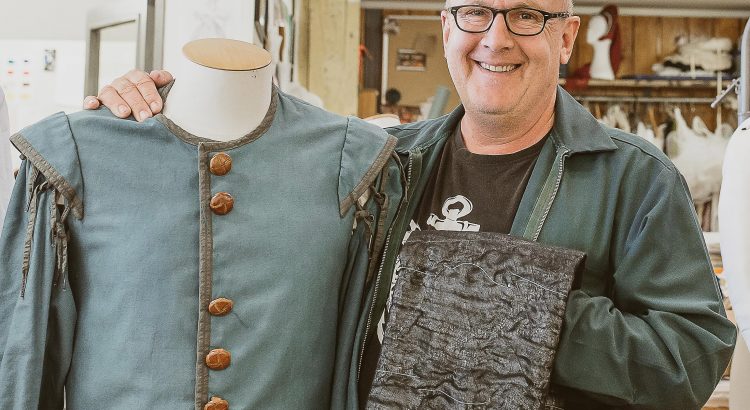 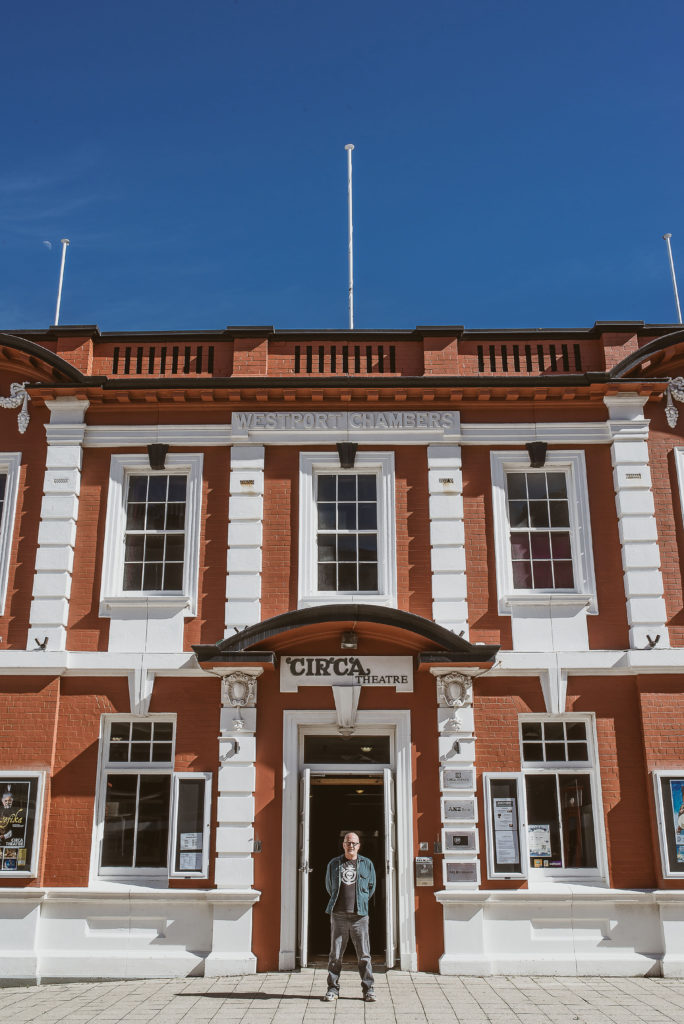 I met Peter Hamb­leton about 25 years ago. We can’t agree on the year. He and I were stu­dents at an ‘advert­ising ideas school’, where aspir­ing advert­ising ‘cre­at­ives’ could learn the trade, and hope­fully make the acquaint­ances they needed to launch a career. I was young and daft, and wanted to work in the industry. Hamb­leton was older, and slightly dis­con­sol­ately hop­ing to find some­thing more stable than what he had been doing, so that he would know from one week to the next where his young family’s next meal might be com­ing from.

It says a lot about the life of a pro­fes­sion­al act­or, that work­ing in advert­ising looked stable by comparison.

Hamb­leton got the work he was hop­ing for, and stuck it out for a few years. I went back to pre­tend­ing to repair cars, and leav­ing an occa­sion­al graf­fito on the walls of Mid­night Espresso, by way of being ‘cre­at­ive’.

That course is the first thing Hamb­leton brings up when we meet. It’s a glor­i­ous Wel­ling­ton morn­ing in the first days of autumn. Hamb­leton has a new play to talk about; this magazine has a capa­cious maw for inter­views with com­mit­ted Wel­ling­to­ni­ans. And I couldn’t be hap­pi­er to have been giv­en the job of sit­ting and chat­ting, and then writ­ing up some of the res­ults. Hamb­leton is, truly, an abso­lutely delight­ful bloke. I was dimly aware of this 25 years ago, but we’ve crossed paths a few more times since then, and I’ve always been struck by his ser­i­ous­ness, by his great humour, by his utter com­mit­ment to the task at hand.

“It was an inter­est­ing time, I guess, in hind­sight. I was a happy young act­or, and I was get­ting some inter­est­ing roles, and lov­ing the life to a point. But then there’s what I call the dark peri­od, when I didn’t believe — rightly or wrongly — that act­ing was ever going to be able to pay the bills, the mort­gage… and you feel a respons­ib­il­ity to get out there and join the race. I was a postie for a while. I had the South Karori route, and then I picked up some gigs with some of Wellington’s less glam­or­ous ad agen­cies. I had a rare tal­ent for get­ting pos­i­tions under cre­at­ive dir­ect­ors I didn’t get on with. And, of course, I was miser­able. But in that pos­i­tion, with a fam­ily, your misery feels like selfish­ness, and per­haps it is, so you keep at it. But I was lucky, I got some calls from people who wanted to cast me in pay­ing roles, and even­tu­ally I made it back.”

It’s an actor’s life, and we talk about that. Hamb­leton reels off the names of sev­er­al col­leagues, any of whom you could have seen on TV in the last year or to. Each of them has their own stor­ies — often very recent — about work­ing on build­ing sites, in post offices, in call centres. We joke about how easy it is to find a land­scape garden­er in Wel­ling­ton between the Hob­bits and the Avatars. But there’s no bit­ter­ness, or any sense of relief evid­ent. I’d expec­ted him to say “Thank Gawd, that’s not my lot any more” — more about that later — or to express some out­rage that pro­fes­sion­al theatre and film work­ers should still accept such instabil­ity in their lives. But, in the next breath he’s remind­ing me that it is the same all over the world. Lon­don and Los Angeles are no dif­fer­ent for the great major­ity. No sym­pathy is asked for or expected.

“I went to Naenae Col­lege, and theatre was sur­pris­ingly strong there. Graeme Tet­ley [who before he passed away in 2011 was per­haps New Zealand’s greatest screen­writer, with Vigil, Out of The Blue, Mr Wrong and dozens of hours of prime-time tele­vi­sion to his name] was teach­ing Eng­lish. He was the one who first really got me to read Shakespeare. I mean, I’d read him before, but it was Graeme who lit that par­tic­u­lar fire. People like Graeme, and [fel­low teach­ers] Les­ley Edgley and Peter Browne, they were inspir­ing, and they made sure that our school pro­duc­tions were quite incredible.”

There’s a clat­ter on my record­er here. The Fish­Head pho­to­graph­er has arrived. I’m struck by how quickly Hamb­leton trans­forms into — well, into someone who is utterly used by now to hav­ing his photo taken. The chin lifts, the fea­tures split into a quite infec­tious grin. For a few moments our pho­to­graph­er is the centre of his atten­tion. It’s a lovely demon­stra­tion of pro­fes­sion­al­ism, and of sheer unfake­able affabil­ity. I’m reminded, quite force­fully, that this friendly, blokey, avun­cu­lar chap has spent the last few years car­ry­ing a star­ring role in three of the biggest films ever made, and that his face is recog­nised in pretty much every coun­try in the world. He makes sure that our pho­to­graph­er has everything she needs, and then picks up the thread immediately. 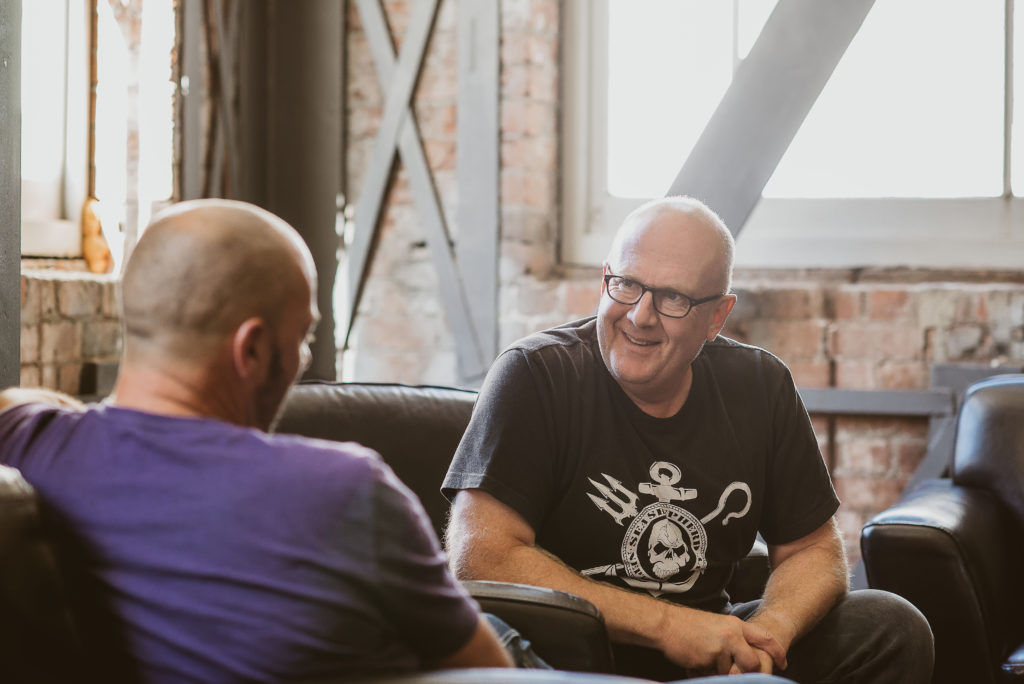 “And it was in the blood. My par­ents had met dur­ing a play they were both doing at teacher’s col­lege. My dad went on to radio, and tele­vi­sion. He [Keith Hamb­leton] became a TV news­read­er. So it was always in the house I guess. Dad car­ried on later, doing theatre, and oth­er bits and pieces on the TV. He passed away five years ago, but for a while there my agent Tim Gor­don was very proud of the fact that he had three gen­er­a­tions of Hamb­letons on his books. He had Dad, and my daugh­ter Soph­ie, and me. So with it in the fam­ily, and at school, it made sense to me to fol­low an act­ing career too. There were plays at school, and a few things at uni­ver­sity, and of course there was a real high point in New Zea­l­and theatre and TV then as well — I could walk down the road and see great act­ors, people like Grant Tilly and that crew, all strut­ting their stuff. So that inspired me too, and soon enough I was audi­tion­ing for the New Zea­l­and Drama School.”

Hamb­leton gradu­ated, and launched him­self into the world of Wel­ling­ton theatre and tele­vi­sion. “It was the tail end of an era I guess. Down­stage could still take you on as kind of appren­tice. It was dicey, but if you were lucky you could find a little niche for a while… I had a tiny role in Close to Home, anoth­er one in Coun­try GP, I was in some­thing called Adven­turer. Me and Mar­shall Napi­er were sidekicks to Oliv­er Tobi­as. And his main claim to fame was that he’d been in The Stud with Joan Collins… bloody amazing.” 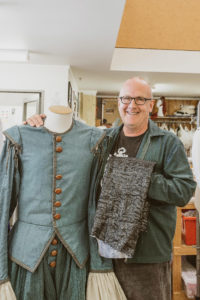 We talk about the state of the film industry today. About how it was that after 30 years of get­ting along just fine, we found ourselves with film crew march­ing down the street protest­ing about what film act­ors were or weren’t ask­ing for. It was a lit­er­ally sur­real time, and Hamb­leton was, unwill­ingly, right in the middle of it.

“You know, even before I was cast in The Hob­bit, one of the things I noticed about that time was that whatever opin­ion I expressed… well, I would have been bet­ter nev­er say­ing any­thing, because everything any­one said was being wil­fully mis­in­ter­preted by both sides.”

Hamb­leton — and there can’t be many people who ever trod a board in Wel­ling­ton who can say this — had nev­er been in a Peter Jack­son film before The Hob­bit came along.

“When Tim Gor­don rang me, I didn’t believe him. I ser­i­ously thought he was pulling my leg, or had made a mis­take. I mean, I’d been out there and audi­tioned. It was a fireside scene, with a few lines of dia­logue, and I knew I’d audi­tioned well. And I’d done some motion-cap­ture tests against a green screen. But I assumed that it’d be, I dunno, Bob Hoskins… and us loc­als would get a few crumbs. It was amaz­ing. And for three weeks, I couldn’t even tell anyone.”

We talk briefly about the Hob­bit shoot, but as Hamb­leton says, there’s only so much you can even begin to describe. A film set is a stu­pendously busy and invig­or­at­ing place, full of some of the most inter­est­ing and eccent­ric char­ac­ters you will meet in a life­time, but it is also a place of work, and there’s not a lot of fun and glam­our in two — nearly three — years of pre-dawn starts, long days and phys­ic­ally demand­ing roles.

“But at the same time, the exper­i­ence, the people I’ve met… it’s utterly unique, and irre­place­able, and I feel fant­ast­ic­ally lucky to have been there.”

“It’s enriched my life,” he says, “but not in the way that people assume. For a couple of years we were on a very good salary, but there seems to be an expect­a­tion from people who don’t know any bet­ter that we’re set for life. In real­ity, I’m prob­ably about where I’d be if I’d had a so-called nor­mal job these last 30 years. It’s let me pay off some of the accu­mu­lated debts, but I’m still look­ing for the next gig.”

Which brings us here, to the foy­er of Circa Theatre, and this warm autumn day.

We’d talked about Hambleton’s love of Shakespeare for a while already, and it seems the best of nat­ur­al pro­gres­sions that he should be dir­ect­ing a play not by Shakespeare, but about him. Equi­voc­a­tion is a much-feted script by the Amer­ic­an Jesuit play­wright Bill Cain. Cain has epis­odes of House of Cards on his CV, which seems a great recom­mend­a­tion for the dark polit­ic­al satire of Equi­voc­a­tion. The play is set against a back­drop of the Gun­powder Plot. Shakespeare has been reques­ted — by the king’s own man — to write a ver­sion of the events that will please King James but still be his­tor­ic­ally accurate.

“It’s extraordin­ary,” says Hamb­leton. “It’s in mod­ern lan­guage, but Eliza­beth­an cos­tume, which feels right for a play about con­tem­por­ar­ies. It’s a play about mis­in­form­a­tion, about media man­age­ment, about WikiLeaks… it’s the most excit­ing script I’ve seen in years. I stumbled across it a while ago, and I was set to do it in 2011. But the phone rang.”

Equi­voc­a­tion by Bill Cain opens at Circa Theatre on May 24 and is proudly sup­por­ted by Fish­Head.