By Graeme Tuckett on February 27, 2014No Comments

Unity Books owner Tilly Lloyd was raised in East Otago by farm worker parents, studied politics at Victoria University – briefly – and went into nursing before finding a new career in the mid-1980s as a publisher’s representative. She was hired as buyer (and later manager) at Unity in 1990, and co-purchased the business in 2005. She has worked at 11 Writers Weeks, which are part of Wellington’s biennial New Zealand Festival. Graeme Tuckett spoke to her at her Paekakariki home. Photography by Mark Tantrum 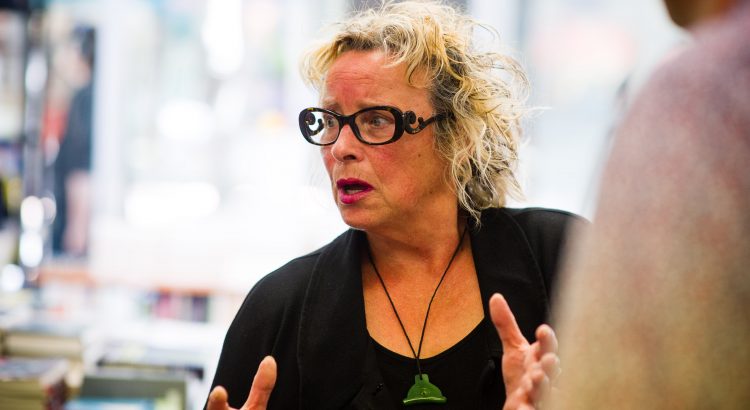 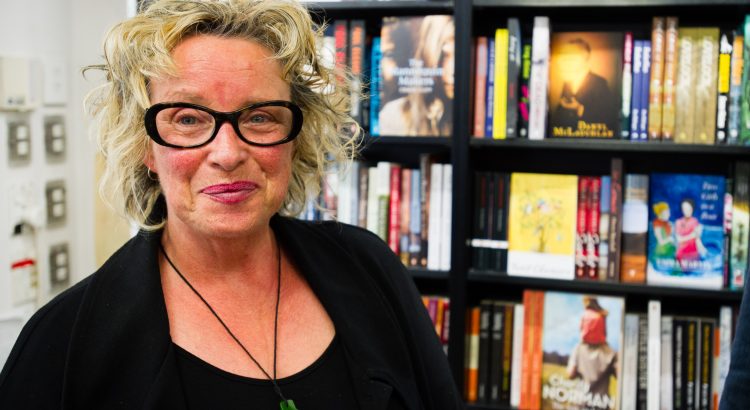 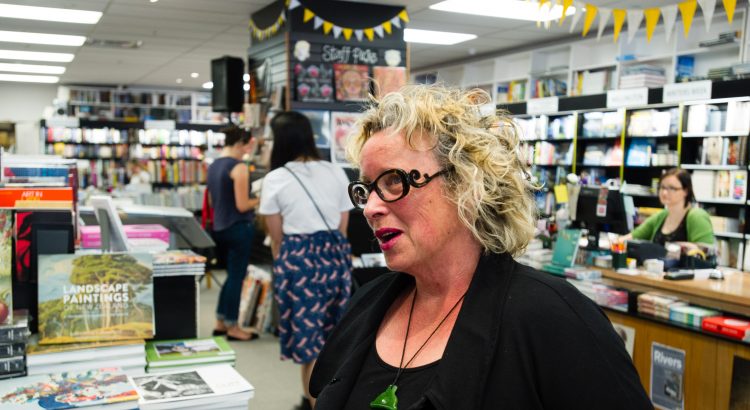 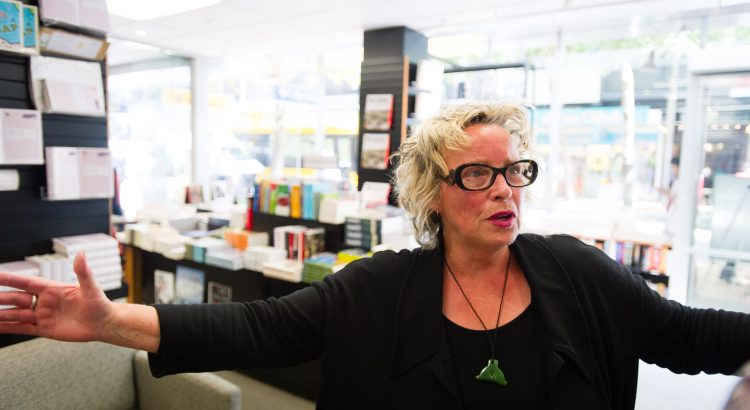 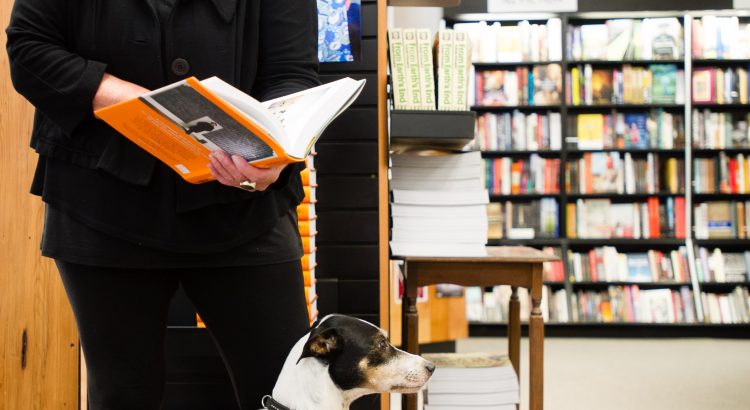 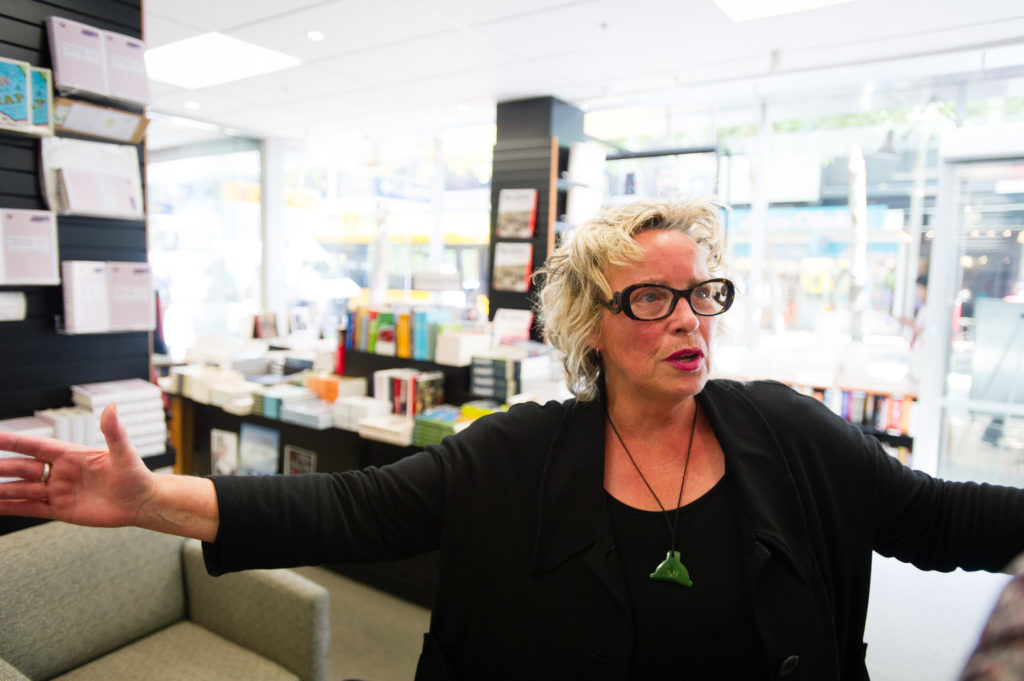 “If you want it, you must have it,” says Tilly Lloyd at one point, per­haps an hour into our intensely enjoy­able con­ver­sa­tion. Well, I enjoyed it any­way. After half a life­time spent in sales, book retail­ing, deal­ing with authors and pub­lish­ers while liv­ing in a small and fam­ously paro­chi­al vil­lage, she might have been dis­sem­bling like a demon. But I don’t think so. She has noth­ing to gain by me being here, tak­ing up this stormy Monday hol­i­day after­noon. And although Tilly strikes me as lib­er­al to the point of anarchy, it is also scream­ingly obvi­ous that, like all truly pas­sion­ate people, she would not suf­fer a fool in her com­pany for any longer than it took the first pot of cof­fee to be drunk.

And we are well into the second pot, and hav­ing ser­i­ous dis­cus­sions about the pos­sib­il­ity of gin, by the time that par­tic­u­lar quote appears. Lloyd is telling me about a few of the per­ils of retail­ing in gen­er­al, and run­ning a suc­cess­ful inde­pend­ent book­shop in par­tic­u­lar. You second guess one author’s pop­ular­ity incor­rectly, and you’re stuck with a bin full of stock at half price, try­ing to move it on to make room for the next best­seller or sur­prise smash hit. But get it wrong the oth­er way, and there’s a queue of punters out the door, ask­ing for a book you only thought to bring in a few cop­ies of.

In books, as with movies and music, you’re nev­er sure where the next big thing might come from, or what innoc­u­ous little paper­back from a first-time author might sud­denly explode in the pub­lic con­scious­ness. So, she says, you just have to back your­self and your staff to the hilt. Hence, “If you want it, you must have it.” It was first said to her by Unity Books founder Alan Pre­ston, just across the road from the shop’s cur­rent Wil­lis Street incarn­a­tion. Lloyd was unsure of a pur­chase. She loved the book in ques­tion her­self, but didn’t know wheth­er there would be a mar­ket for it. “But”, she says, “you just have to back your­self don’t you? It’s bloody scary at times, but what else can you do? Alan gave us that.”

“You know, I guess the Inter­net has been a chal­lenge for every bug­ger. But when the dust settles, it’s giv­en us – even us book­sellers – more than it’s taken. Yes, people can order a book online now. We’re right into it ourselves – our own Unity Books site goes gang­busters too – but, more than that, people are read­ing more now. And because of all the won­der­ful blogs and sites, they’re hear­ing about books that they might not have heard of before. And they’re sharp too. They’ll be in the shop on Monday, ask­ing us about some­thing they read about in the New York Times online the night before. I love it. Keeps us on our game.”

The steps to Tilly Lloyd’s house are nar­row, steep, made of ancient cement, and flanked by a broken and rust­ing hand­rail that looks like a dose of tetanus just wait­ing to hap­pen. It is the sort of ascent that would put off all but the har­di­est Jehovah’s Wit­ness, and scare any door-to-door sales type or pamph­let-drop­ping estate agent into try­ing their luck at some safer alti­tude down the road. Which is almost cer­tainly one of the reas­ons Lloyd leaves these steps in such an unabashed state of dis­repair. Most days I would enjoy the climb. I like people who value func­tion­al­ity over appear­ance, and the steps are noth­ing if not func­tion­al. But an hour before I’m due to inter­view Lloyd, the seabed bey­ond Castle­point has had a small tan­trum, the whole region is in a state of high nervous­ness, and these steps are lean­ing off to the north at an angle that would give an EQC inspect­or conniptions. 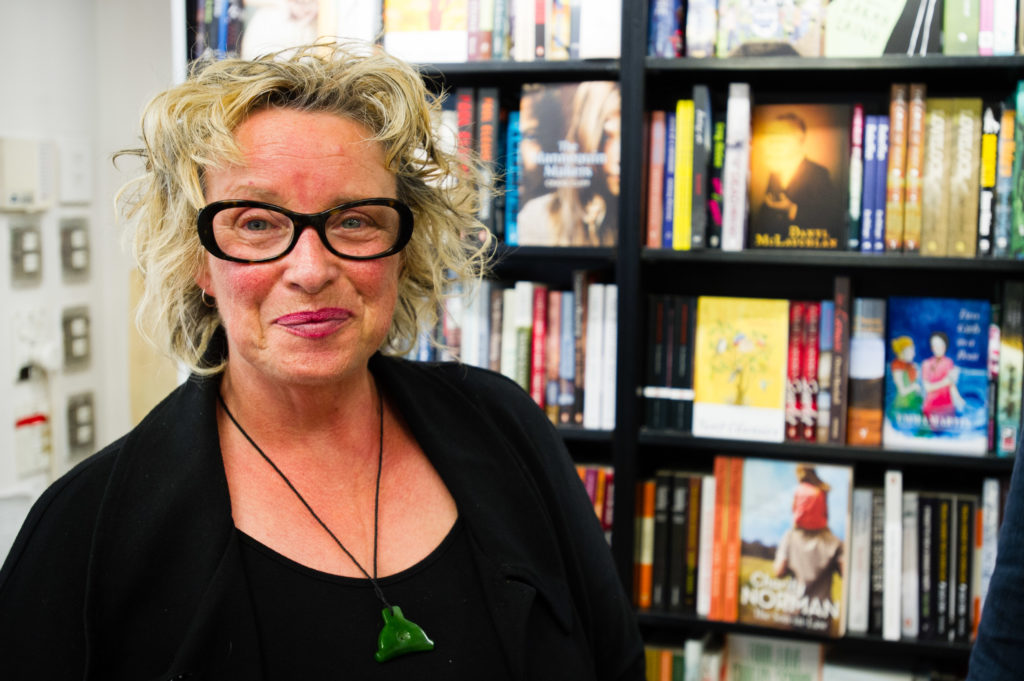 I fig­ure they’ve been like this for dec­ades, but I’m not chan­cing it today, and I jog up them sharp­ish. At the top, there is one of those views that we Kapiti coast types take annoy­ingly for gran­ted. On a bright day from here, Lloyd would be gaz­ing out at the top of the South Island, Kapiti Island, and even clear up to the Tarana­ki Bight if the weath­er was really play­ing ball. But today, we’re enjoy­ing a rare misty and rain­swept Janu­ary day. Kapiti is a half-glimpsed shad­ow, lit­er­ally loom­ing through a sod­den bank of clouds, and the islands and inlets that form the north­ern reaches of the Marl­bor­ough Sounds come and go through the squalls.

It is a beau­ti­ful day, in its own unseason­able and unex­pec­ted way, and Lloyd’s garden is a fine spot from which to appre­ci­ate it. And so, in a still howl­ing south­erly and the con­stant expect­a­tion of a major shake and an unsur­viv­able tsunami, and accom­pan­ied every step of the way by a small but ener­get­ic ter­ri­er with delu­sions of guard-dog­gery, I found myself knock­ing at Lloyd’s front door.

“We’ve a policy, at Unity Books,” she tells me. “I call it the foible clause: every­one is allowed one foible, and every­one else accom­mod­ates that foible, as they accom­mod­ate ours. It’s sin­gu­lar, of course. You might be a mum­bler, always one minute late back from lunch, not so flash at com­mu­nic­at­ing some­thing intric­ate with the cus­tom­ers, or you might spend longer in the bath­room than any­one else, but that’s all OK. Because everyone’s dif­fer­ent, and get­ting to know and trust someone is the pro­cess of learn­ing their foibles, and learn­ing to work with them. And as long as I’m accept­ing of yours, then you will be accept­ing of mine. It’s not about bad beha­viour, because the staff are abso­lutely bloody won­der­ful. If any­thing, it’s about hon­esty, and people who are pre­pared to let them­selves show. As long as you’re hon­est, we’ll work with it. We might even find a way to cel­eb­rate it. Any­way, if you ever meet any­one who seems per­fect, they’re the one who will let you down, eh?” 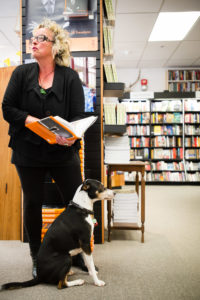 Tilly looks at me curi­ously for a moment, and appar­ently decides that either I’m not yet ready to hear the answer to that, or that if I can’t work it out for myself, I should just shut up until I can. A foible is surely what oth­er people see in you, and not what you see in your­self. But I make a men­tal note that Lloyd’s foible is a com­plete inab­il­ity to com­plete one story before rico­chet­ing off into another.

It is becom­ing an after­noon of pithy man­tras, and this one might be my favour­ite yet.

“I used to work for a mar­vel­lous man, back when I was just start­ing out, when I was rep­ping for a pub­lish­ing com­pany. I was hav­ing a dis­pute with a cli­ent – I can’t even tell you wheth­er it was an out­let or a pub­lish­er, because it doesn’t mat­ter. Any­way, I was young, and I let this idi­ot get under my skin, the way we do when we’re young and everything seems so bloody import­ant. And my sales man­ager took me aside said that to me – ‘Are you going to focus on the bit of shit on the wind­screen, or are you going to look through it to the road ahead?’ – I love that. And it’s got me through a lot of days since. Because you have to remem­ber, you have to believe, that what you are doing is worth it. And as long as you are doing some­thing that’s worth it, then are you really going to let one dis­pute or prob­lem dis­tract you from what you’re actu­ally sup­posed to be doing?”

I loved the emphas­is on ‘sup­posed’ – and it comes through loud and clear on my record­ing. Because there is no doubt at all that Tilly Lloyd is sup­posed to be selling books.

Two things about Tilly Lloyd: she pours a strong gin, and she looks a bit like Meryl Streep. These facts might not be unconnected.

Or at least, she looks like Streep’s stouter colo­ni­al cous­in: all in black, a slash of lip­stick, cheekbones just this side of haughty, and an out­stand­ing – upstand­ing – vaguely leon­ine blonde mane.

It’s there in the house of course, which looks like the second-hand book­shop of your dreams. It’s a simple place, built around the bones of a 100-year-old bun­ga­low, but expan­ded side­ways and upwards until you’d think it was some taste­ful, under­stated, mod­ern­ist pile from the mid-1970s. The ceil­ings are high, and the walls – what you can see of them – are a plain white. But what you can see of them isn’t that much. There are book­shelves built into every room, each one full to burst­ing. Lloyd has divided them up roughly into sec­tions, which would be the only way of hav­ing even a fight­ing chance of find­ing the one book you might be after. She swings her glass in a wide arc, ice clank­ing, ges­tur­ing at vari­ous points on the shelves: “That’s his­tory, Pacific, mod­ern New Zea­l­and stuff I like, all of that up there is sex basic­ally, and I’ve put polit­ics right next to it.”

“God, the last few years have been tough on Wel­ling­ton,” she says. “I really see it with some of our reg­u­lars. Gor­geous people, pub­lic ser­vants, busi­ness people, beau­ti­fully read, hungry for any­thing, great taste. I’d see some of them three times in a week, and they’d always leave with a pile of great stuff. Now, some of those same people are com­ing in once every couple of months, and maybe only buy­ing one or two. We lose a few to the Inter­net of course, but they come back. They look all bloody sheep­ish and tell me they’ve been play­ing away. Hah!

“But it’s sad to see the ones you know would still be reg­u­lars, but they’ve been down-sized or shoved out, and they’re hav­ing to cut back. It’s nev­er the young ones either. Noth­ing against them, so many of them are won­der­ful too, but it feels like we’re gut­ting a gen­er­a­tion that actu­ally know how to get things done. Free-thinkers a lot of them, won­der­fully know­ledge­able about all sorts of things. But that doesn’t fit in with today’s bloody paradigm does it? What a loss.”

“Let’s not talk about child­hood and all that shit,” she says. “It’s just anoth­er rur­al alco­hol­ic story any­way. God knows there’s enough of them, and they don’t sell.” 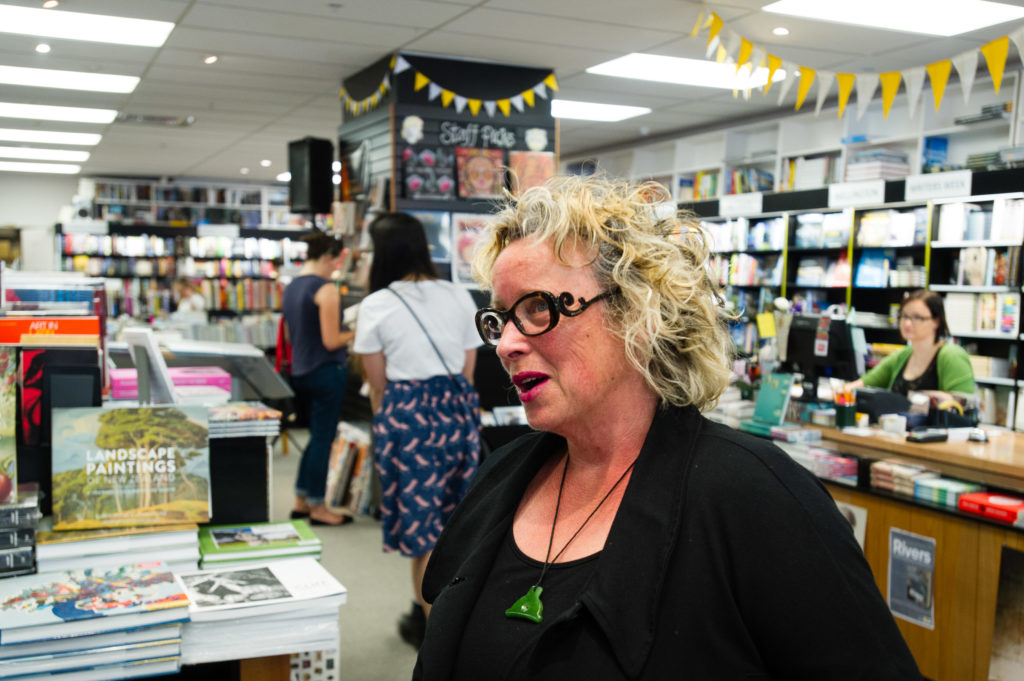