By Graeme Tuckett on August 28, 2014No Comments 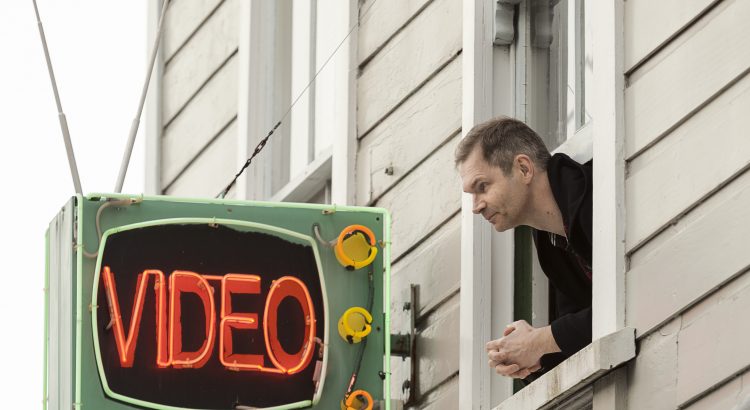 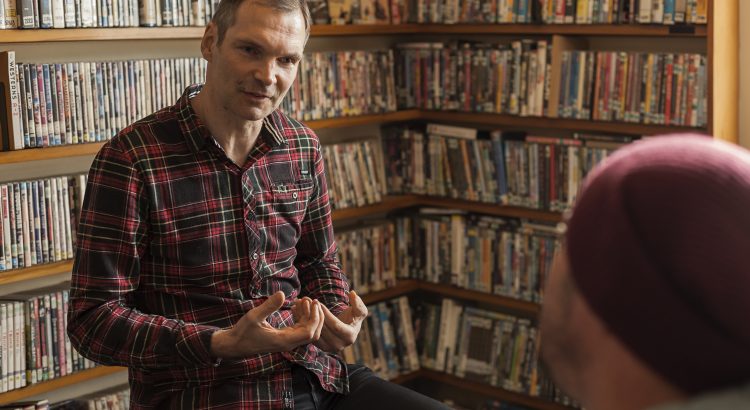 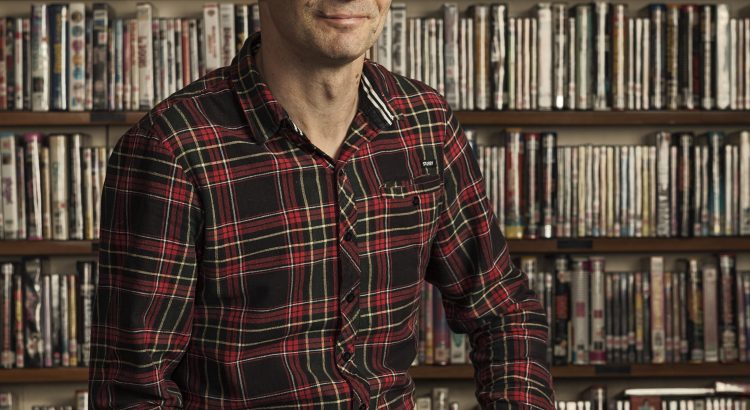 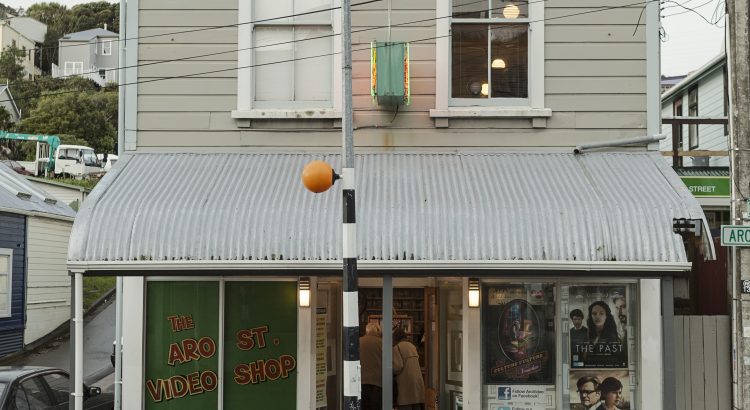 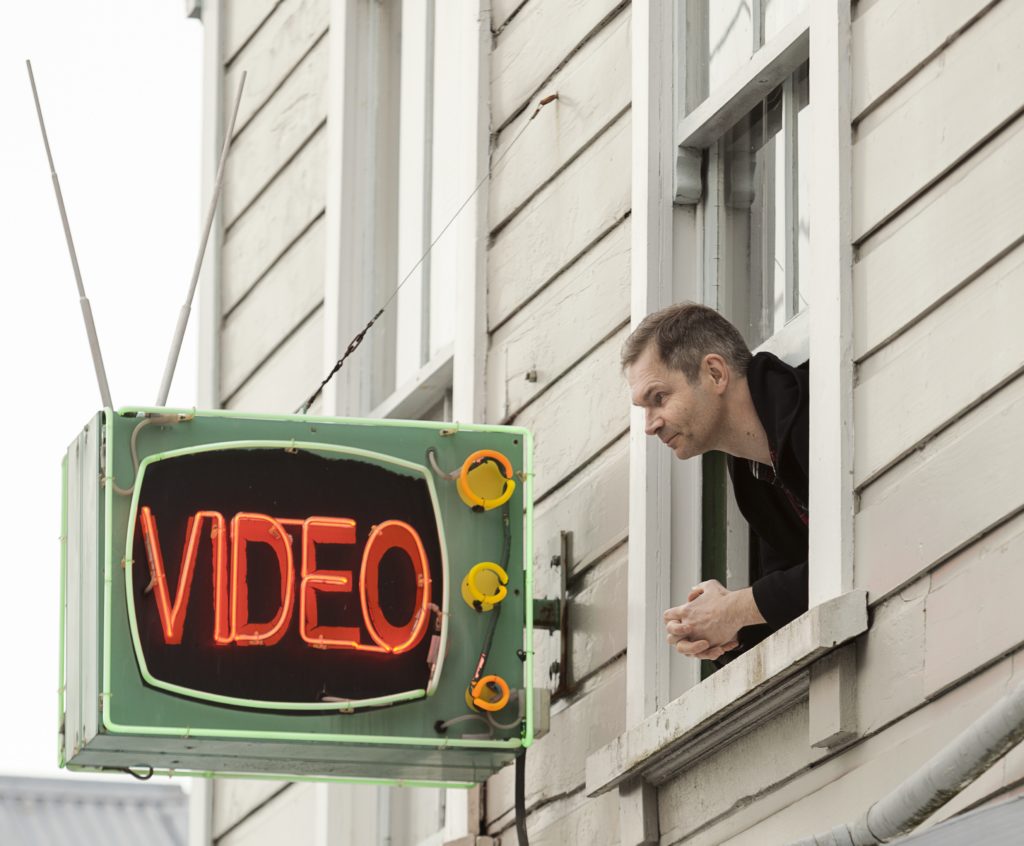 When we talk about ‘the coolest little cap­it­al’, or all that ‘Cuba Quarter’ blath­er, what we are acknow­ledging is the work of a hand­ful of busi­ness people and a his­tor­ic­al fluke that saw the land prices around Te Aro held arti­fi­cially low for a couple of dec­ades. If the Karo Drive ‘bypass’ (what exactly would it ‘pass by’? I’ve always wondered) had gone ahead in the 1970s as ori­gin­ally planned, then Upper Cuba and Wil­lis Street would have been razed and rebuilt in that dec­ade now syn­onym­ous with lousy archi­tec­ture and patho­lo­gic­ally insane town plan­ners. But the road was delayed and the Te Aro flat was allowed to devolve into the slightly ram­shackle col­la­tion of shops, offices and store­fronts we have come to love.

And so it was that some inter­est­ing and genu­inely cre­at­ive people were able to take a punt on start­ing busi­nesses, a coter­ie of musi­cians, act­ors, writers and fab­ulous assor­ted scruffs could afford to live ‘inner city’, and the ‘cre­at­ive cap­it­al’ that the coun­cil and its agen­cies like to trum­pet was born: not because of ‘pro­gress’, but because ‘pro­gress’ was held up for a few decades.

Aro Street, across this fer­tile but impol­ite plain, remained slightly cut off from the rest of the city, and gathered around itself a repu­ta­tion for rad­ic­al­ism and a very faint whiff of outlawdom.

You’d be a fool to try to rep­lic­ate that per­fect storm, but it happened, and it got us to exactly where we are today: pub­lish­ing a magazine cel­eb­rat­ing all that is best about Wel­ling­ton, out of an afford­able office roughly halfway between Cuba Street and the entrance to the Aro Val­ley, writ­ing about the founder of one of the mostemblem­at­ic of those trail­blaz­ing businesses.

Andrew Armitage’s Aro Street Video store is a lynch­pin of the Wel­ling­ton city in which many of us live. It has the unlike­li­est, most serendip­it­ous and humblest of begin­nings, and yet it has out­las­ted nearly every oth­er inter­na­tion­al chain video store in town. 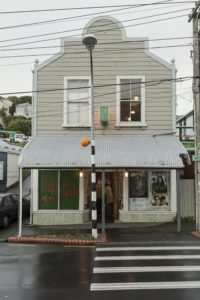 to Lon­don in 1988,” says Andrew. “I went there on a schol­ar­ship. I was a man­ager at the HMV record store in town, and they awar­ded me this trip to Lon­don to check out what a big city store was doing. But I was get­ting bored with record retail­ing a little by then. I still loved my music, that whole early 80s post-punk move­ment. But it was around the time that I was abso­lutely fall­ing in love with film. I think maybe film was going through its own ver­sion of a post-punk revolu­tion, and there was so much energy in the scene. But apart from the film fest­iv­al once a year, you couldn’t see much of any­thing that wasn’t at the mul­ti­plex. Great films would turn up at the Para­mount, but you’d nev­er see them on video. But I came back from Lon­don with a box of about 20 VHS tapes. I had Eraser­head, The Com­ic Strip stuff with Rik May­all and Adri­an Edmond­son, Ken Rus­sell… It was just for me and my wife Sally and friends. And it was around that time that we bought our home, and I was lit­er­ally just walk­ing home one night, and I saw this vacant front room in a neigh­bour­ing house, and I thought, ‘That would be a good spot for a cult video store’… it really was just like that.

“I think I took my inspir­a­tion from the Aro Street Café, because even then that was an icon­ic busi­ness. It had been around since the 1970s, and it was proof that it could be done up here. In fact, that’s why I called the shop Aro Street Video, and not some clev­er movie pun name. Even then ‘Aro Street’ was what people would call a ‘brand’. It came with its own val­ues attached, and I wanted to be iden­ti­fied with that.”

I like this, and I can hear myself grunt­ing my agree­ment on my record­ing. Of all the city sub­urbs, Aro Street is the one that has retained its old char­ac­ter the most. It’s still a place you reach delib­er­ately, or not at all. The rest of the city has not per­meated it. Aro Street is a tidi­er, shi­ni­er place than it once was, but it is still iden­ti­fi­ably a sep­ar­ate vil­lage with­in the city.

“Noth­ing really worked except the lights. The staff would have to walk 50 yards up the road to our house if they wanted to use the toi­let. I organ­ised buy­ing trips to Auck­land, where the sup­pli­ers were. I knew that the movies I wanted were there, because they all had to buy a load of stuff they didn’t want along with the Steven Seagals and the rest. It was my favour­ite part of set­ting up; get­ting on a plane, pick­ing up a hire car, driv­ing out to these ware­houses in Hende­r­son, and there’d be boxes of VHSs, just sit­ting there with no one really know­ing what they were.”

At which point we can lay to rest a myth about Aro Street Video.

“Of course we always stocked the good main­stream stuff as well. The day we opened we had Tom Hanks and Beaches and Schwar­zeneg­ger on the shelves. It’s just that we had the more off-beat and hard-to-find stuff as well, that no one else had.”

I’m glad Andrew brought it up. Even today, many people think that Aro Street Video only deals in the art­house. Kind of iron­ic, since I’m con­duct­ing this inter­view with an entire rack of Bruce Wil­lis glar­ing down at me.

“We opened in 1989 with about 170 VHS tapes. A lot of people said we were mad, because it was the same month as TV3 star­ted, and they figured that with three TV chan­nels there wouldn’t be a mar­ket for video shops… ”

You don’t need me to tell you how hard we are both laugh­ing here on my record­ing. But it does bring us neatly around to the present day:

“It’s hil­ari­ously tough at times, but we’re not going away… ”

The Inter­net has taken an irre­place­able chunk of busi­ness, and Aro Street Video has an ongo­ing prob­lem with New Zealand’s cen­sor­ship office. Put simply, every film avail­able to buy or rent in New Zea­l­and must be rated and that costs up to $1,000 per movie. Often Aro Street Video is import­ing films that no oth­er out­let will stock — that’s why the busi­ness exists — and that means there is no one to share the cost of the rating.

The old clas­si­fic­a­tion and import­a­tion mod­el seems ludicrously out­dated, now that any­one can down­load any­thing and Sky TV can show pretty much whatever they want. The whole thorny busi­ness of cen­sor­ship needs a com­plete rethink for many reas­ons, but the fact that we are allow­ing bur­eau­cracy to wreck New Zea­l­and busi­nesses while we wait for the politi­cians to find the will to have that con­ver­sa­tion is utterly unforgivable.

There will be people who read my little rant here (and it is mine, not Andrew’s) and say, “So what? It’s an out­dated busi­ness mod­el. People can find what they want on the Internet.” 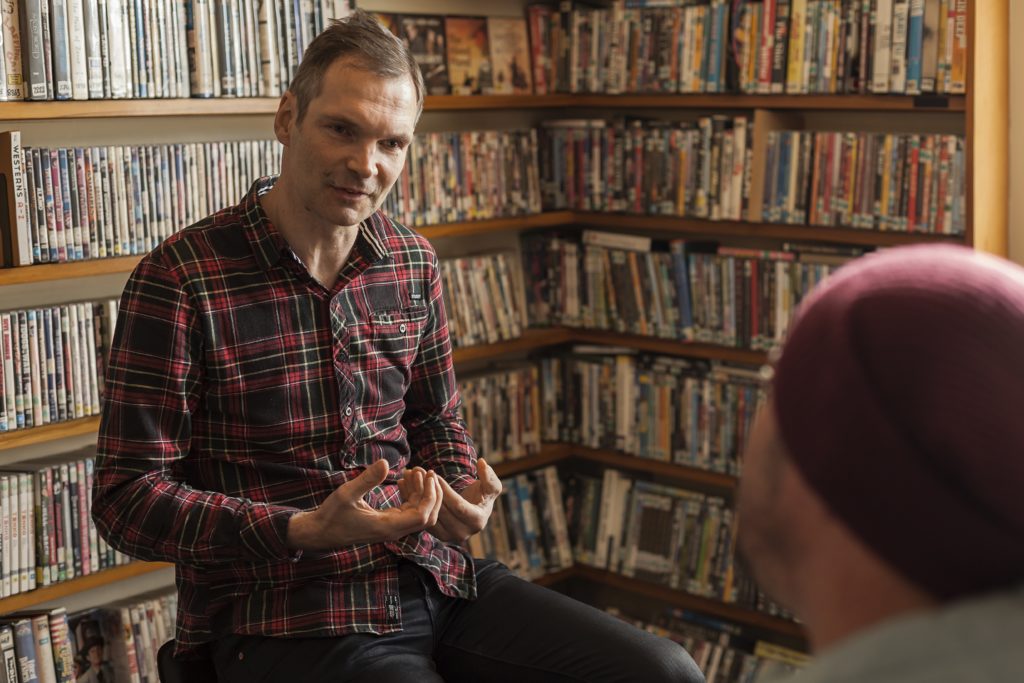 But those people are wrong.

Six months ago in these pages I talked to Tilly Lloyd of Unity Books. Tilly sur­prised me when she said that although the Inter­net took away busi­ness, after an ini­tial bad few years busi­ness was now recov­er­ing. Andrew has found the same. Busi­ness isn’t what it was ten years ago, but the free-fall is over. Andrew and Tilly agree on the reas­on why. Call it cur­at­or­ship. You don’t walk into Aro Street Video, or Unity Books, or Slow­boat Records, look­ing for some gen­er­ic way to waste a few hours. You go look­ing for some­thing good, but per­haps not yet known to you. And for that you still need people. We might pay a few dol­lars, but we walk away with a guar­an­tee of sat­is­fac­tion, and an irre­du­cible memory of human contact.

So I’m mus­ing on all that, and won­der­ing how to fin­ish this piece off on a cel­eb­rat­ory note. Because we are here to mark the con­tin­ued flour­ish­ing of a busi­ness that has suc­ceeded where multi-nation­als have failed. And then I hear myself ask­ing Andrew about the new cus­tom­ers, the ones who turn up for the first time. He laughs.

“It’s amaz­ing,” he says. “We get kids come in here who might nev­er have been in a video shop before, and their eyes just light up. I mean, when we star­ted out, every sub­urb, every small town, they all had a couple of places you could go and hire a decent movie for the night. Now, we’re filling a void left by the big com­pan­ies giv­ing up. We’re cour­i­er­ing films all over the coun­try. There are people lit­er­ally from Kaitaia to Bluff who are cus­tom­ers of ours. Some of them ex-Wel­ling­to­ni­ans, and oth­ers we’ve nev­er met, they email us and phone us up, ask­ing for a recom­mend­a­tion. And we bag up films and send them out. The next week the films are back, and they’re phoning up or on the web­site look­ing for their next one.”

And sure enough, as we walk down­stairs the assist­ant is doing just that: put­ting good films in cour­i­er bags ready to be dispatched.

I ask Andrew about the pos­sib­il­ity of com­bin­ing the worlds, by open­ing a site to stream movies dir­ect. He says it would be pos­sible, but that the cost of set­ting up would require an investor. With the Aro Street Video name to trade under, you have to won­der wheth­er one of the fam­ously movie-lov­ing entre­pren­eurs in Wel­ling­ton might be will­ing to come on board.

Just as I’m get­ting ready to leave, Andrew says to me, “You know, we star­ted out talk­ing about records and music. Two of my boy­hood her­oes died last month — Rik May­all, of course, but also Casey Kasem… I was out there in my par­ents’ house in Lower Hutt, just a kid, and I’d listen to Casey Kasem and the Amer­ic­an Top 40. And there’d be this music you wouldn’t hear any­where else. Not the Top 10, but the hid­den gems, the ones that New Zea­l­and radio would nev­er play. Really great music, but not well enough known. That always made a big impres­sion on me.” We both look around the shelves of the shop. It doesn’t need to be said. Andrew laughs. “Yeah… ”