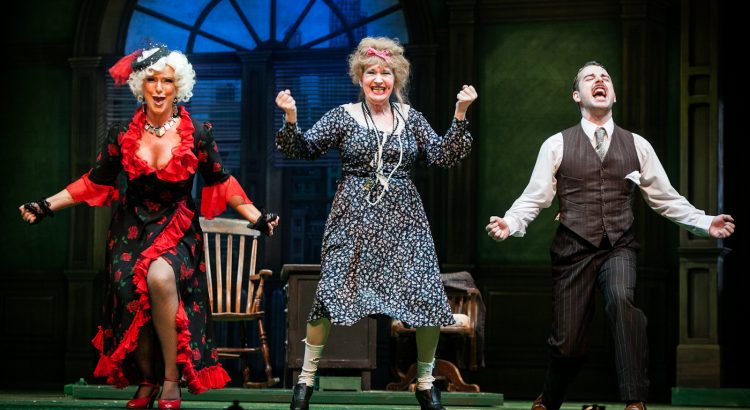 I have a con­fes­sion to make: I love music­al theatre. I have anoth­er con­fes­sion: I fear it too. Being a born and bred Wel­ling­to­ni­an, it is built into my very core to fear sin­cer­ity. I’ve trained myself to think that there always must be an agenda. This is why I fear music­al theatre. If it’s not happy, it’s cer­tainly big and bright, it’s so infec­tiously large and exuberant.

Music­al theatre people, fans or prac­ti­tion­ers, can be such a beau­ti­fully odd bunch. They are reli­gious zealots whose chapels are theatres and whose robes are sequinned. They glow. It can be quite over­whelm­ing, like star­ing at the sun.

So, when late last year I was asked to inter­view Su Pol­lard (of Hi-de-Hi! fame) about the com­ing tour of Annie, in which she plays Agatha Han­nigan (“I have these fab­ulous moments where I get to scare the orphans. I’m nev­er afraid to go there because it’s got to be real”), I had to pause for a minute before I said yes. What was I get­ting myself into?

A lot, it seems, because Ms Pol­lard is cer­tainly a char­ac­ter. A music­al theatre char­ac­ter to be pre­cise. Loud and lovely and totally alive. “All this energy comes because I keep pas­sion­ate about stuff,” she explained. “I think if you lose your pas­sion and enthu­si­asm then it’s time to quit.” Judging from the levels of pas­sion and enthu­si­asm dis­played dur­ing our inter­view, Su is a long way off quit­ting. “I always want to go for­ward,” she explains.

She speaks at a mil­lion miles a minute and is very good at des­ig­nat­ing things “mega fab­ulous”. For the first ten minutes or so of the inter­view, cyn­ic­al me could see only the media train­ing, the repe­ti­tion of my name and my ques­tion in her answers. She is such a pro. But I was wrong. She wasn’t being cyn­ic­al. She just cared. She likes mak­ing people happy, giv­ing them a good time.

She likes Annie because it’s for all the fam­ily, no one excluded, and because “it’s about people’s struggle, every­day struggle. Not to put too much of a drama slant on it. But it’s also about hope.”

There’s a kind of uncom­plic­ated sin­cer­ity in Annie — “The sun will come out tomor­row” after all — that is also in Su Pol­lard, that is also in all of music­al theatre. It may seem over­whelm­ing at first, but once you’re use to it, you won­der why the whole world isn’t that way.

Annie runs from 23 May to 8 June at the St James Theatre.