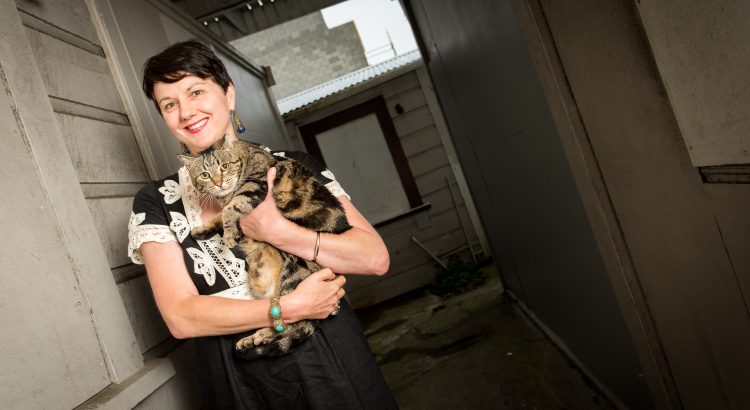 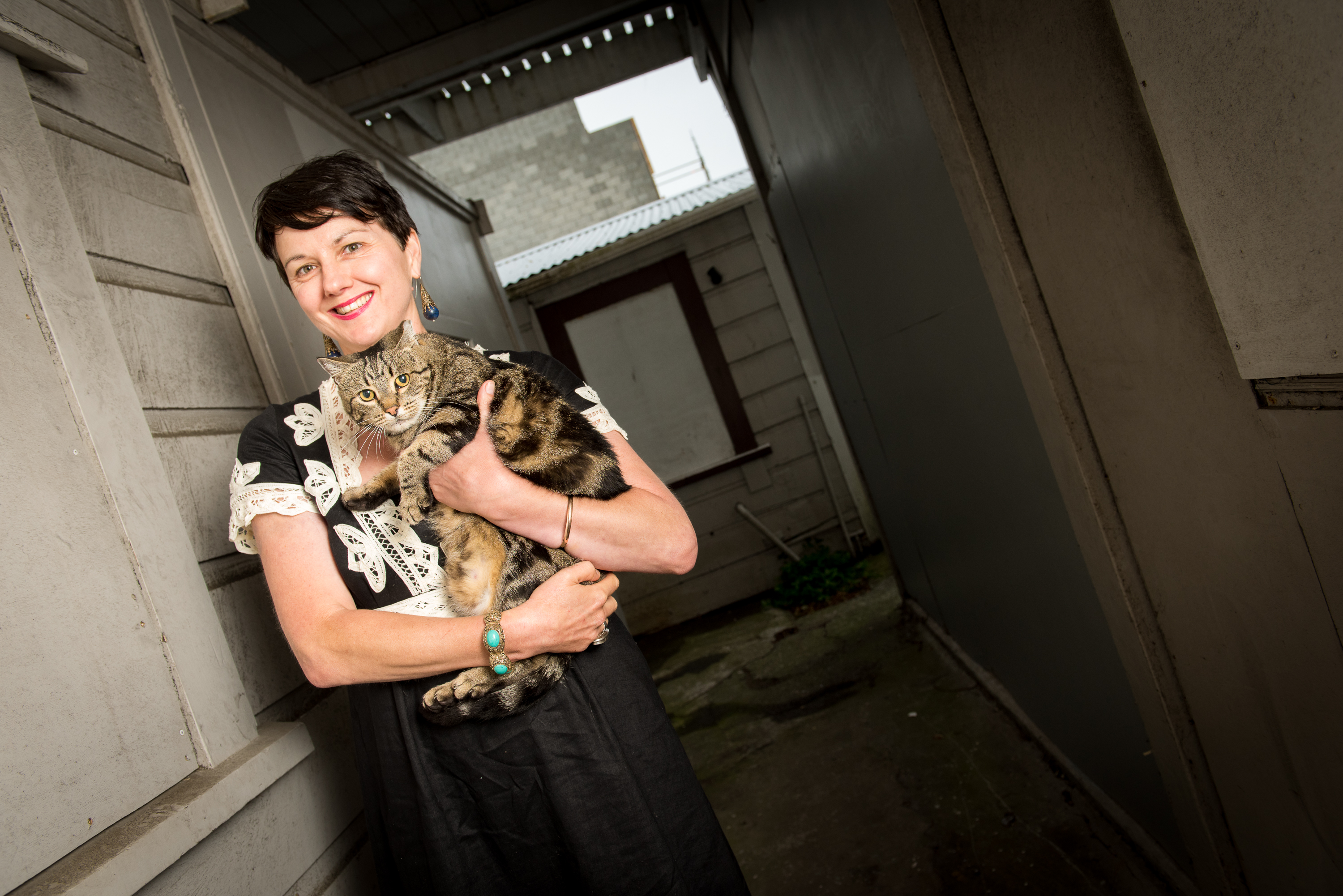 One day last year, when I was pok­ing around the grounds of the big semi-derel­ict house on the corner of Abel Smith and Wil­lis Street, I noticed a sign that pro­claimed its writer to be, under the Anim­al Wel­fare Act, the guard­i­an of the small colony of stray cats liv­ing under that house.

That writer turned out to be Angela Camp­bell, a res­id­ent of one of the nearby apart­ment blocks. A couple of years ago, she had noticed there were a lot of stray cats liv­ing around the old house, which was being neg­lected by its own­ers, the New Zea­l­and Trans­port Agency.

Nash called the SPCA, so they could come and remove them, “but they said, ‘We don’t catch cats.’ So I just star­ted feed­ing them, and social­ising them.” With steely determ­in­a­tion, Nash became, quite lit­er­ally, “like a guard­i­an for the cats”. She provided them with food and shel­ter, and “sup­por­ted them in where they live”; she even bought a ken­nel for them to use, though they ignored it and kept sleep­ing under the house.

In an 18-month-long cam­paign, she was able to get 19 cats — includ­ing two lit­ters of kit­tens — cap­tured, neutered and (for the most part) rehoused. The SPCA found new homes for the kit­tens, which were, of course, young and cute and eas­ily domesticated.

The adult cats, in con­trast, were regarded as a hope­less case. “The think­ing was that they would nev­er be able to live in a domest­ic situ­ation, because they were all too wild,” says Nash. “But that’s been proven wrong.” She found homes, among friends and con­tacts, for almost all of the now neutered adults. “They are not going to be lap cats, but they [their new own­ers] knew that.” Just two cats now remain under the house, still aloof, though happy to take Nash’s food once a day.

It was quite a feat, of course, feed­ing all those cats for 18 months, and one won­ders what might have motiv­ated it. “Well, I don’t like any kind of suf­fer­ing. I don’t like to see anim­als starving, or being cold.”

For some people, the answer to that prob­lem is few­er anim­als — espe­cially if you’re, say, an anti-cat cam­paign­er like Gareth Mor­gan, who one ima­gines might not be Nash’s favour­ite per­son. “I’m not sure exactly what he was about,” she says, dip­lo­mat­ic­ally, “but he was talk­ing about [people tak­ing] respons­ib­il­ity, and I don’t think that’s a bad thing.” The wider issues around con­ser­va­tion, nat­ive bird­life and the dam­age done by cats are, she feels, out­side her ambit. “I’m too busy to think about that stuff — I’m just con­cerned about anim­al welfare.”

Nash gave all the cats names — such as Tru­man and Misty — and built up a rap­port with them. “It’s very sat­is­fy­ing, you know, when you can achieve that. Though Misty was hard — she took about three months [to bond with].” There was no great secret to cre­at­ing the rap­port, just kind­ness, 18 months of con­stant and reg­u­lar vis­its — oh, and Tempta­tions food treats, “which are like some kind of crack for cats”.

Dur­ing that 18-month stretch, Nash would often cycle down to the house, and even­tu­ally the cats “would get to recog­nise the sound of my brakes. That’s pretty spe­cial, you know?” But it was, she admits, “exhaust­ing”. Not to men­tion expens­ive, one imagines.

Oth­er people, she says, have largely been sup­port­ive of her efforts. “Though there were some people liv­ing nearby who were like, ‘You just need to kill them.’” Gareth Mor­gan sup­port­ers, per­haps. “Well, it wasn’t actu­ally very helpful.”

Any­way, all of this is very admir­able, but it does beg one ques­tion: how many cats does she her­self own? “I live in an apart­ment,” Nash says, “so I can’t have animals.”