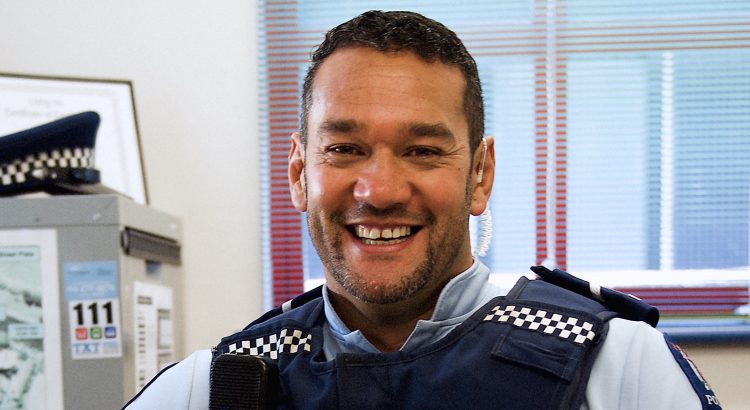 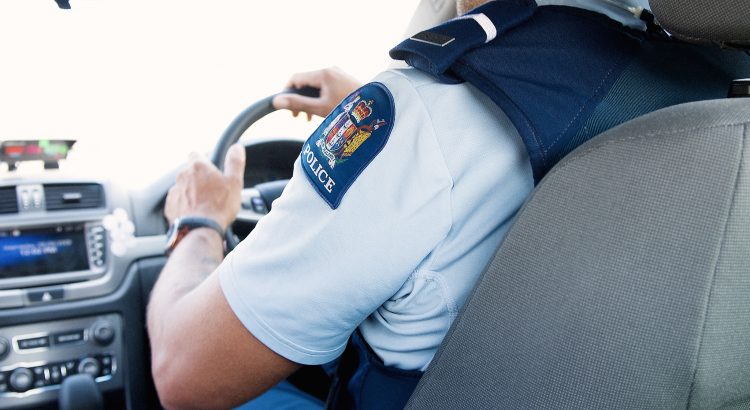 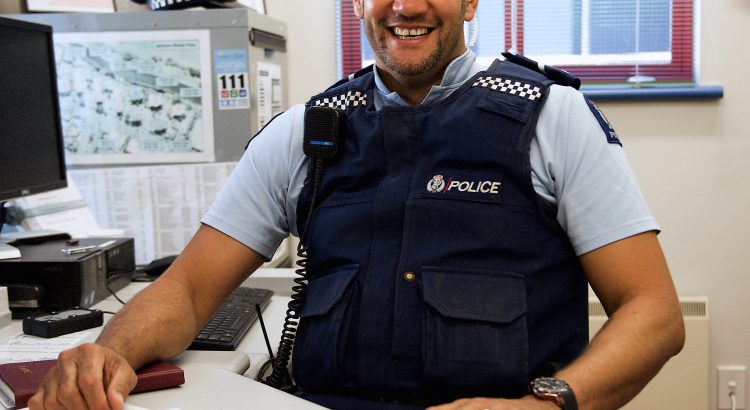 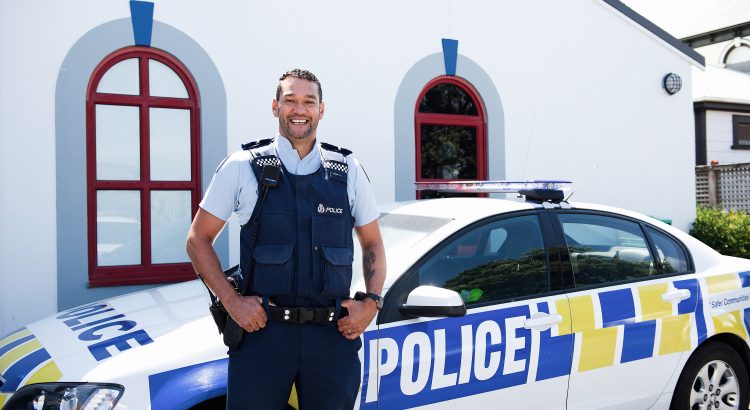 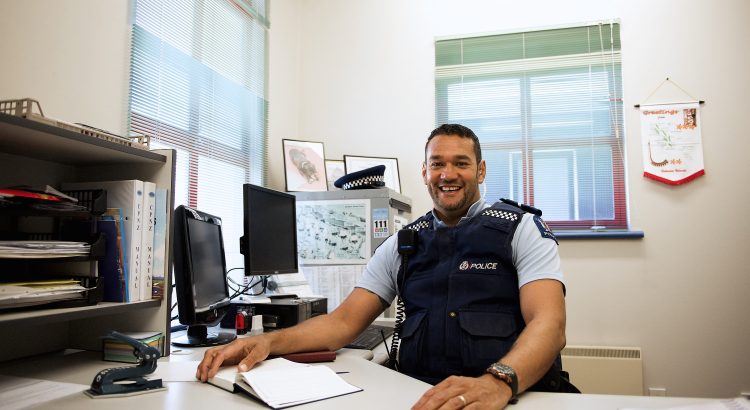 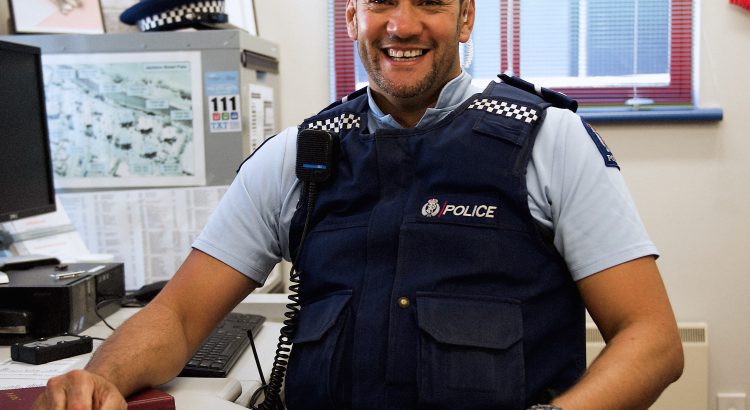 They say you could build a battle­ship in Petone, and I reck­on that’s prob­ably right.

Pho­to­graph­er Anna and I are tak­ing a drive in Seni­or Con­stable Rasau (Russ) Kalivati’s patrol car. It’s been 20 years since I was last in a police car, and this is my first time ever sit­ting up the front. Russ is enga­ging, quite bril­liant com­pany, and maybe the very best advert­ise­ment the New Zea­l­and Police could have.

Russ lived in Petone for many years, and for the last two-and-a-half he’s been back here every work­ing day, as Petone’s own com­munity con­stable. For the nine years before that, Russ had the same pos­i­tion in nearby Naenae. We’ve been talk­ing about the area, and Russ pretty much bubbles with pride about the place and its people. But even so, his asser­tion that we could turn our own anti­podean Bis­mar­ck out of this place comes as a sur­prise. But you know what… he’s prob­ably right. There’s industry here, and inven­tion. Along with Pori­rua, it is Petone and neigh­bour­ing Seav­iew that are the last man­u­fac­tur­ing power­houses of the region. Long after Wel­ling­ton has for­got­ten how to make any­thing but a movie or a phone app to rate your last craft beer, Petone and Pori­rua will still be mould­ing, milling and cre­at­ing the stuff we need to live in the real world.

It’s a nice insight, from a hell of a nice guy. It’s an obser­va­tion that con­nects this place and day to anoth­er time and gen­er­a­tion. Which seems appropriate.

I wanted to be a cop pretty much my whole life. Even when I was eight years old. Both of my broth­ers were in the force. They were both older than me by years, and I grew up see­ing them in their uni­forms, hear­ing their stor­ies, and I knew then it was what I wanted. It’s strong in my fam­ily. My grand­dad was in the force back in Eng­land — in the 1940s and 1950s he was Lon­don Met­ro­pol­it­an Police, on the motor­bikes. So I grew up with his stor­ies, and pho­to­graphs of him. So I know that was an influ­ence too.

Russ laughs here, and I have an image — prob­ably com­pletely wrong — of stuffy colo­ni­al officers beam­ing with pride as ‘their man’ brings home the medals. 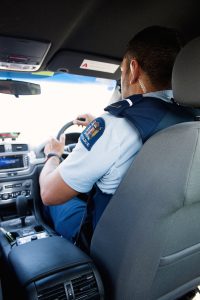 I actu­ally joined late, even though I knew it was where I was going. I was a bank officer at first. But I made it to police col­lege, and I gradu­ated on my 30th birthday.

One of the things I like the most — with the com­munity work — is that you get to see a thing right through. Most police work, you take it so far, and then your work and res­ults are going to be handed off to anoth­er depart­ment to fol­low through. And that’s fine; at that level it’s the only effi­cient way to do the job. But at the com­munity level, I get to see a prob­lem through from begin­ning to end, and I love that.

It might be low-level stuff, that in the great scheme of things is pretty minor. But I’ve had people come in and tell me they can’t sleep at night, or they can’t con­cen­trate on their fam­il­ies prop­erly, for wor­ry­ing over a dis­pute they are hav­ing with their neigh­bour. It might be some­thing like a tree on someone’s prop­erty, and a row over prun­ing it. I mean, it’s minor to you and me, but it’s these people’s qual­ity of life.

I like this a lot. It makes a pile of good, calm sense, and it res­on­ates with me, bring­ing back con­ver­sa­tions with eld­erly par­ents a few years back. Russ car­ries on.

So some of what I do is just medi­at­ing before a dis­pute can flare up, or get worse, or carry on in a way that wrecks someone’s enjoy­ment of their own life. And what I notice is that people will come in, quite fired up, say­ing, “I want you to pro­sec­ute so and so”, and at the end of a meet­ing, they’ll be shak­ing hands and talk­ing, and offer­ing to lend them a trailer.

I mean, most people can get there them­selves, and aren’t going to need us to medi­ate. But some of the most vul­ner­able people around here, they haven’t got the skills or the con­fid­ence for that, and it mat­ters that someone should be there for them. You know, com­munity is for every­one to enjoy. Some people need a hand with that.

We talk here for a while about the style and approach to poli­cing that the com­munity con­stables can bring. How being approach­able at ground level can pay dividends even the most con­ser­vat­ive of us could appreciate.

I’ll give you an example. A while back I was giv­ing a talk at a school not far from here. And I’d got there early, and was hav­ing a walk around. I knew that there had been a break-in the night before, some win­dows broken. And a bunch of the loc­al kids were watch­ing me, and chat­ting, and fol­low­ing me around. And we just talked. I didn’t ask them dir­ectly who might have done it, but soon enough a few of them pipe up, “We know who did that”. And that’s a big thing, because the cul­ture in New Zea­l­and — espe­cially at their age — is nev­er to be a nark. That’s the low­est of the low.

I sug­gest to Russ that the kids were hanging back until they real­ised they could trust him, and that the essen­tial equa­tion for the kids to make was know­ing that their friend would be bet­ter off being caught now by someone like Russ, than in anoth­er few years when their treat­ment might be a lot more impersonal.

I think that’s about right. It’s not quite as clear-cut as that, but they all want to live in a good place, and most of them real­ise after a while that that’s what the police want too. They have to know that they can trust us.

I always say, when I’m deal­ing with an offend­er, that I want him or her to be treated the way I’d want someone in my fam­ily treated. That’s what’s always at the back of my mind.

Someone said to me once that poli­cing is the same all over the world. It’s always the same job: help­ing keep com­munit­ies work­ing prop­erly. The only thing that really changes are the indi­vidu­als. And maybe they’re not so dif­fer­ent either.

One thing this job has taught me is that every­one pretty much knows the solu­tion to their own prob­lems already. Just some people have a hard job see­ing it or express­ing it. I know when people come to me with a dis­pute, and they say to me, “Well, what are you going to do about it?” Usu­ally I just ask them straight back, “What do you want to hap­pen? What do you think the best solu­tion is?”, and almost always they’ll know exactly what they want, and nine times out of ten it just comes down to acknowledgement.

People just want a con­ver­sa­tion, or a simple apo­logy, just some acknow­ledge­ment that they haven’t been ignored, that they are respec­ted. And I think that’s prob­ably true right across soci­ety. And the per­son who’s going to do that most often is the per­son who has been respec­ted themselves.

I ask Russ here about some­thing that’s been much on my mind the last few years, because I fig­ure he’s in a bet­ter place to com­ment than most: among the most vul­ner­able of the com­munity around him — the unem­ployed, the eld­erly and the people who are just the least able to cope psy­cho­lo­gic­ally with the 21st cen­tury — does he think they are bet­ter off or worse off that they were ten years ago? Russ stops and gives the ques­tion real con­sid­er­a­tion. We both know that polit­ics and policy are off lim­its, and Russ phrases his answer carefully.

What I can tell you, from my own obser­va­tion, is that there are far more home­less people. It used to be quite rare. We would see home­less people who, for whatever reas­on — mainly men­tal-health issues — who chose to be inde­pend­ent and alone. But now, I think it’s different.

And people beg­ging… I’ve def­in­itely seen an increase there. I think in part there’s an increase in the accept­ab­il­ity of beg­ging, that people are actu­ally more will­ing to take it up than they would have been a few years ago. But I think there is an increase in actu­al need too, for some people. 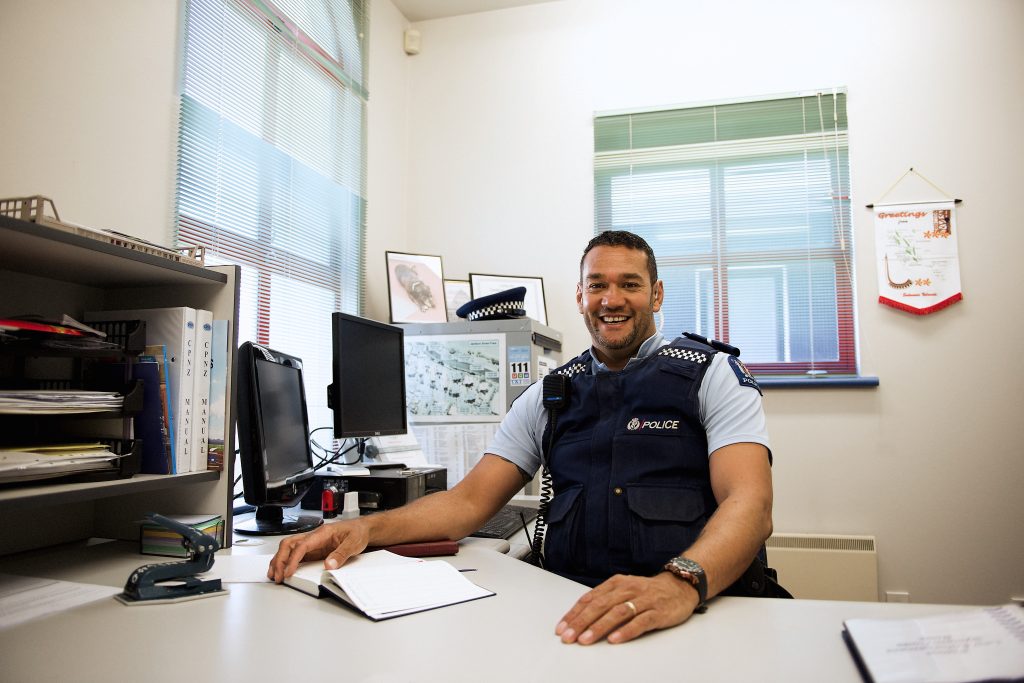 We talk here for a while about addic­tion, about the beg­gars we have both seen who have no interest in being giv­en bur­gers and pies by bleed­ing-hearts like me, but who are on the streets to make enough money to feed their addictions.

We don’t get into the pro­lif­er­a­tion of bottle shops, the effect­ive­ness of the cam­paign against methamphet­am­ine or the fine I copped last week for rid­ing my bike without a hel­met. I kinda wish we had, but I asked for only an hour of Russ’s time and I’ve already been here for two-and-a-half.

We’ve driv­en past hous­ing cor­por­a­tion flats and pros­per­ous water-view apart­ments, and through busy indus­tri­al estates and deser­ted fact­ory pre­cincts. We’ve talked about the neigh­bour­ing com­munit­ies of Alicetown, Wainu­io­mata and East­bourne; about people Russ has met, his fam­ily and sons, and what he hopes for this place in the future. It’s been a ter­rif­ic day, and even more than usu­al I’m look­ing for­ward to find­ing a quiet café and get­ting the laptop out to write it up. Like most people, I’m a lot less cyn­ic­al than I pre­tend to be, but today I am actu­ally quite inspired.

Russ puts a very faint beat between the words “law” and “order” here. It’s clear on my record­ing, and I like it a great deal. I’ve pretty much always pro­nounced ‘law and order’ as one word, one concept, without paus­ing to con­sider that they are two some­times quite dif­fer­ent things. We all know what ‘law’ means, but ‘order’ is more neb­u­lous, more open to indi­vidu­al inter­pret­a­tion, even if it’s not a word we spend much of our day think­ing about.

And I think maybe that’s what makes a great com­munity con­stable — that ‘order’ is some­thing they are con­stantly seek­ing and defin­ing, even as the eco­nom­ics and the cir­cum­stances of people’s lives shift around them.