By David Colquhoun on May 7, 2015No Comments

David Colquhoun on the days when four hooves, not four wheels, were the norm 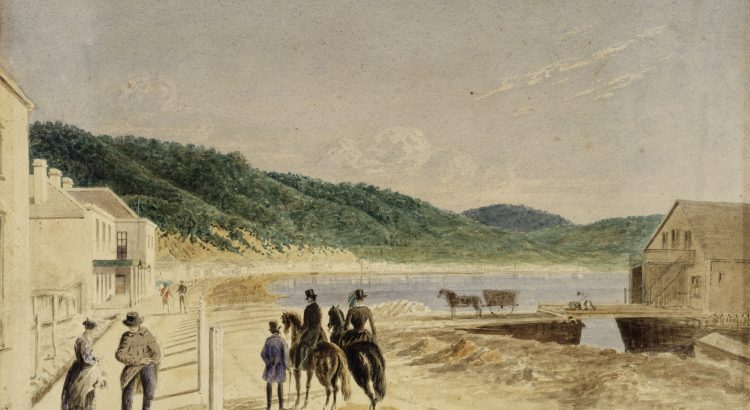 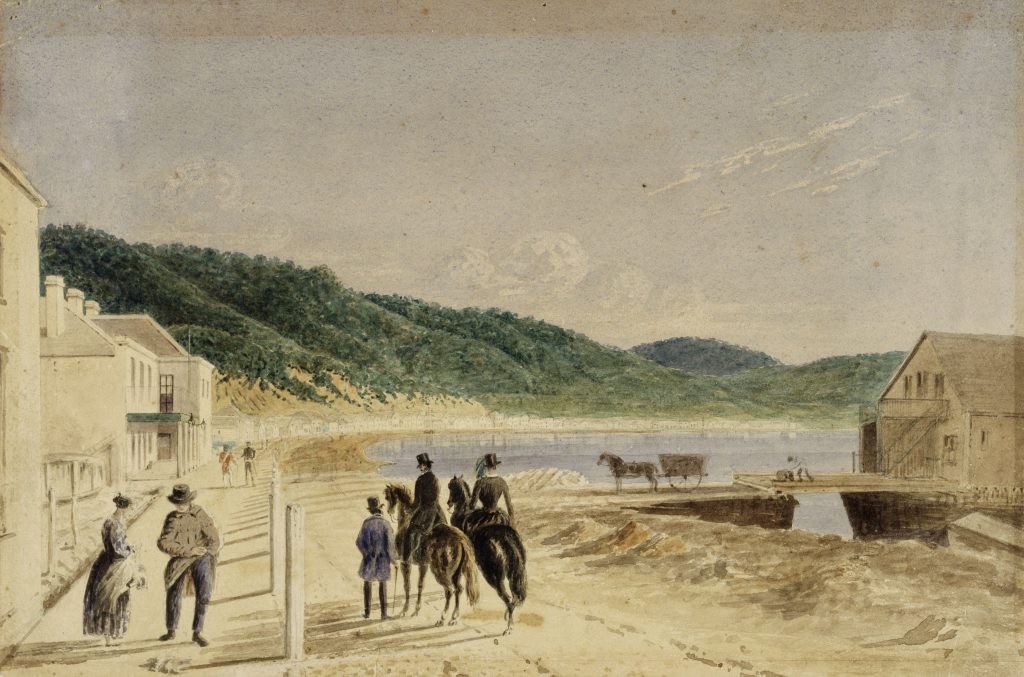 Here is early Wel­ling­ton on a good day, look­ing north down Lamb­ton Quay. On the left, with the ver­anda, is Barrett’s Hotel, the social hub for many. On the right is John Plimmer’s ware­house, known as ‘Plimmer’s Ark’, built on top of an old hulk. You can still see the remains of it under­neath the floor in the Old Bank Arcade. Out of sight, behind the artist, is rough and ready Te Aro, with its water­front com­merce and cramped work­ing-class housing.

But, inter­est­ing as that is, the reas­on I chose this pic­ture is the horses. It made me think about how dif­fer­ent the sights, sounds and smells of a horse-powered town must have been.

Horses were every­where. Some were equine aris­to­crats, like these two in the fore­ground — well-bred and eleg­antly presen­ted, all ready for an eye-catch­ing prom­en­ade down the quay. Most, though, were humble work­ing horses, like the one in the back­ground, patiently wait­ing out­side the Plim­mer hulk. The town depended on them, for all kinds of trans­port, ser­vices and cartage.

As the town grew, so did the horse pop­u­la­tion. Every­where there were stables, big and small — behind the hotels, down alley­ways, or attached to houses and shops. They could be uncom­fort­able neigh­bours. Amongst the many horse-related com­plaints in the Wel­ling­ton City Coun­cil archives is one about stables on Tarana­ki Street: “The stench from these places is some­thing awful and with a drop of rain the juice is run­ning all over the foot­path.” They could be noisy too. At the end of the day there was a lot of feed­ing and groom­ing to do, and lar­ger stables were some­times rowdy male hang-outs until late in the evening.

More enthu­si­ast­ic about the capital’s equine inhab­it­ants was young Pat Lawlor. In his clas­sic 1959 book Old Wel­ling­ton Days, he remembered how the city’s stable own­ers took their horses to Ori­ent­al Bay for a reg­u­lar Sunday swim: “It was great to watch them, though you had to be wary when they came out of the water.” The beach became so crowded with horses on a Sunday that the Wel­ling­ton Har­bour Board decreed they all had to be gone by 8.30am.

Wellington’s horse pop­u­la­tion peaked just before the First World War. The status-con­scious were more likely to fancy a new car than a fine horse and gig. Horses still did much of the heavy shift­ing around the town, but num­bers declined. The last work­ing horses were those doing the city milk deliv­er­ies. They were finally pen­sioned off in 1956.